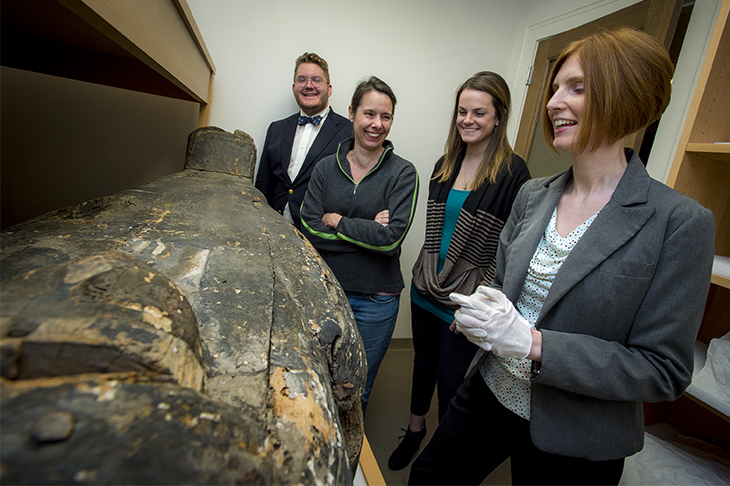 A 3,000-year-old Egyptian coffin gets a closer look by Melinda Nelson-Hurst, research associate in anthropology, and students (from left) Jules Paris Vetter, Maria Arabie and Elise Hanemann. The students have taken anthropology courses from Nelson-Hurst and have an ongoing interest in the Egyptian artifacts at Tulane. (Photos by Paula Burch-Celentano)

“It"s an odd and interesting story of how the Middle American Research Institute has Egyptian mummies,” said Marcello Canuto, director of MARI.

Canuto opened a lecture on Nov. 12 at Dinwiddie Hall, home of MARI, the Tulane anthropology department and two 3,000-year-old mummies, part of a group of Egyptian artifacts that were donated to Tulane in 1852. Canuto asked the attendees to help raise “seed money” to hire a conservator to evaluate the artifacts. Online donations to the project are welcome.

The two mummies, one male and one female, were donated to Tulane along with several coffins and parts of two innermost mummy cases by Egyptology lecturer George Gliddon after Gliddon staged a mummy unwrapping in New Orleans.

Keynote speaker Melinda Nelson-Hurst, an Egyptologist and Tulane research associate in anthropology, said that the male mummy was 50-plus years old at death. Inscriptions on his coffin indicate he was Djed-Thoth-iu-ef-ankh, a priest and overseer of craftsmen at the Temple of Amun in Thebes.

Not much is known about the better preserved female mummy, who died at about age 15.

Nelson-Hurst is tracing the complicated path of the mummies in their time at Tulane. Initially they were lodged in a museum at the medical school, and later at a museum of natural history in Gibson Hall.

A letter discovered recently showed that when the Gibson museum closed in 1955, the artifacts were unsuccessfully offered to the University of Pennsylvania, Nelson-Hurst said. The collection ended up being stored for 24 years under the bleachers at old Tulane Stadium.

The stadium stay was interrupted in 1973, when the mummies were returned downtown to a Charity Hospital museum; next they were stored at a physician"s home near Lacombe, Louisiana. Eventually they returned to Tulane Stadium, but moved to the Howard-Tilton Memorial Library basement when the stadium was torn down in 1979. The final move to the anthropology department came in the 1990s.

“Luckily they are all still here,” Nelson-Hurst said, “and we don"t plan to move them somewhere else again. We very much like them and want to give them a proper home.” 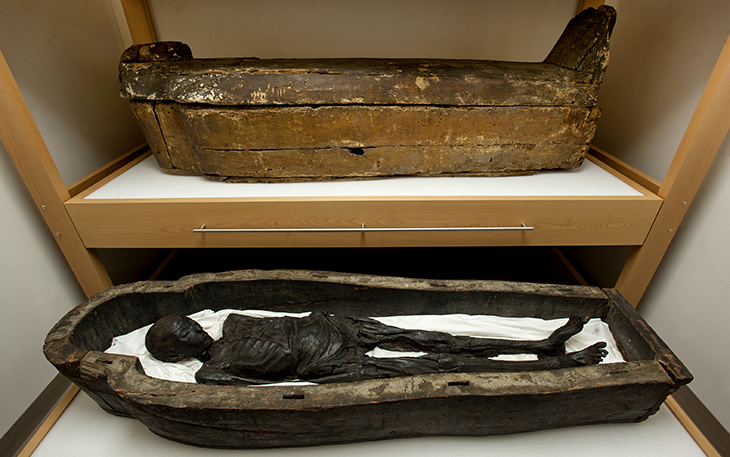 The mummy of a young woman who died around age 15, coffins and other artifacts make up a collection of ancient Egyptian artifacts donated to Tulane in 1852 by George Gliddon, who traveled around the nation giving lectures and staging unwrapping of mummies.