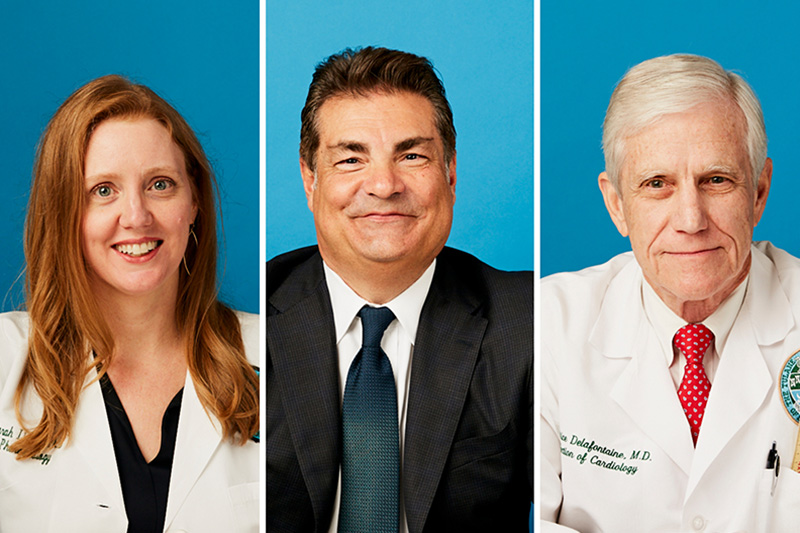 Tulane’s efforts to treat, cure and prevent disease are not confined within the walls of the School of Medicine. Instead, the most exciting medical discoveries will happen across campuses and departments — made possible by the teamwork of researchers in multiple schools and departments. Three School of Medicine investigators — one who recently joined Tulane, one who has seven years of service to the university, and one who returned to Tulane shortly before the pandemic began — show that the future of medicine hinges on capacity for collaboration, inside the lab and out.

GIOVANNI PIEDIMONTE, MD
Giovanni Piedimonte, MD, has always espoused a collaborative approach. Piedimonte, a practicing pediatric pulmonary physician, investigator and administrator who joined Tulane as vice president for research and institutional official, as well as a professor in the Department of Pediatrics, keeps an eye toward the evolution of medicine and physician education.

Piedimonte relocated to New Orleans from the Cleveland Clinic Foundation, where he held multiple leadership roles over seven years. At Tulane he will build an NIH-funded lab that will study the effects of viruses, nutrition, and environmental conditions such as pollution on lung development and respiratory health. He intends to pursue interdisciplinary investigative models, and set a campus-wide standard for collaboration. 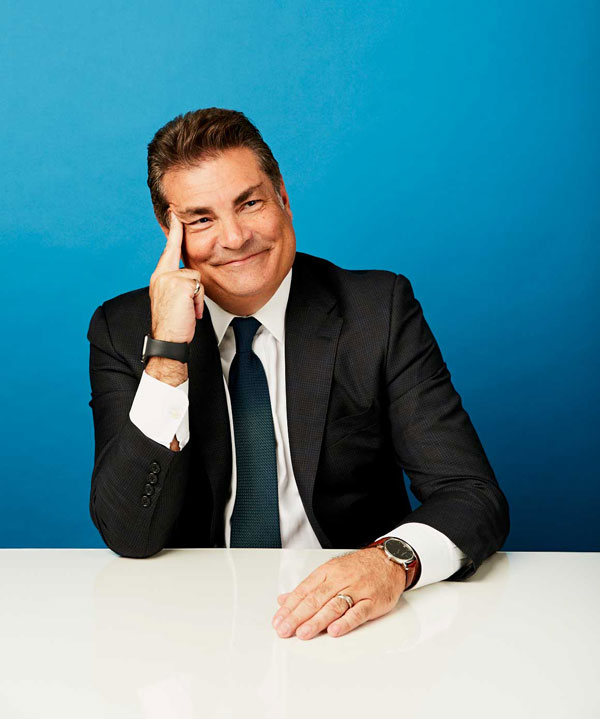 “You can do elegant research in your own lab,” he said. “But if you actually want to bring actionable solutions to a specific and compelling problem, whether it arises from deep scientific questions or pressing societal needs, it is likely that you’re going to need the help of public health specialists, the same way you’re going to need engineers, architects, lawyers, economists, social workers, and on and on.

“Only from the convergence of their knowledge and experience can you find the actual solution. Furthermore, as experts from different disciplines pursue common research challenges, their knowledge, theories, methods, data, research communities and languages become increasingly intermingled or integrated.

“I am a physician-scientist, but I like to work with engineers; I’ve worked with public health specialists, architects, even scholars in liberal arts,” he continued. “If you close yourself into an ivory tower, you’re never going to come up with a true solution [to scientific dilemmas]; it’s much better and much simpler to actually open the problem to collaborators with a totally different background and expertise, and then work together.”

Piedimonte recently published a study that showed how common cold viruses can cross the placenta in pregnant women and modify fetal development. This investigation, he said, will continue at Tulane with the support of a new five-year, NIH-funded grant, and will involve human studies, animal models, three-dimensional lung models in vitro, as well as many other cutting-edge methodologies.

The future of biomedical research and clinical medicine, both intertwined, are rapidly evolving and will change the access to and delivery of health care. He is also interested in the areas of telehealth and precision medicine, as ways to tailor specific treatments to individual patients, with regard to their genetic and epigenetic makeup and other unique characteristics.

Profound changes will become necessary, he said, because demographics will drive them. A new generation of digitally savvy young people will demand a new model of health care, so the alternative to sitting for an hour in a doctor’s waiting room may lie in telehealth or artificial intelligence-aided medicine.

The future of medicine will also consider social and environmental factors for predicting and treating disease, areas which many Tulane researchers from across campuses are currently exploring.

“We are realizing more and more that there is something that is much more important than the genetic code, which is your ZIP code,” Piedimonte said, citing influences such as poor environmental conditions, unbalanced nutrition, and limited access to medical facilities due to lack of transportation. “The state of health of large segments of our population depends primarily on socioeconomic conditions.

“The fundamental frontier for the future of medicine is to limit or abolish as much as possible those inequalities that make our healthcare system so ineffective despite being by far the most expensive in the world.”

But amid rampant technological change and new ways of looking at poor health, Piedimonte believes the physician remains important.

“Humans are going to be always at the center of this. “It’s the way health care is delivered that is going to change, dramatically, because we just cannot stop progress.”

SARAH LINDSEY, PhD
Sarah Lindsey, PhD, holder of the Dr. Barbara S. Beckman Professorship in Pharmacology, was still a relative newcomer to Tulane School of Medicine when she received a $2 million NIH grant to study the role of estrogen therapy in preventing cardiovascular disease in postmenopausal women.

The grant arose from an informal partnership she forged at Tulane, with Kristin Miller, an assistant professor in the Department of Biomedical Engineering. Lindsey was interested in studying postmenopausal cardiovascular disease, but she approached the topic from only one angle, she said, an angle that considered vascular tissue as two-dimensional, rather than 3D. 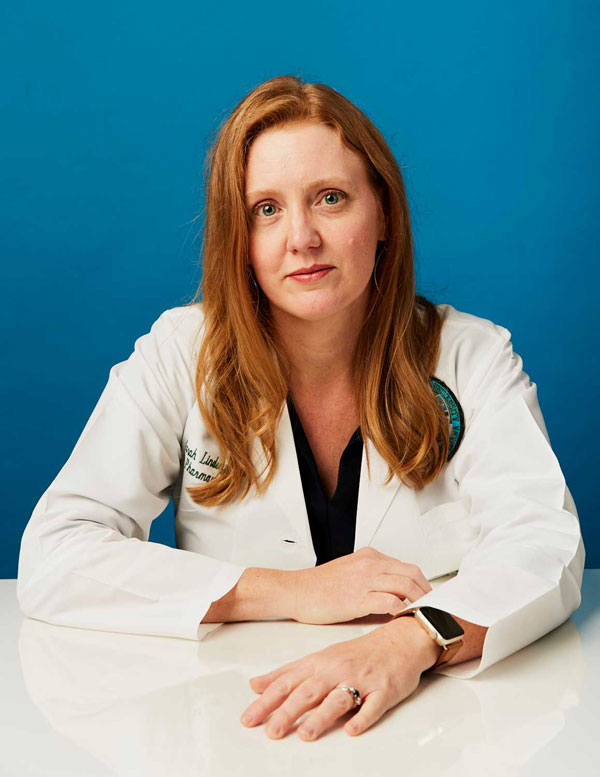 “We did our experiments the way that people in my field always did them. But Kristin said, ‘Biomedical engineers would do it this way because it considers all the different dimensions of the tissue.’”

“We were able to work with them … modifying the technique, and we’re able to now collect a lot more data that way,” she added. Miller’s research also offered capacity for computational modeling, which Lindsey said offered insight into how tissue might react to stimuli.

In 2017, she was awarded the NIH grant, which looks at whether certain estrogen receptors might activate cardiovascular benefits in postmenopausal women. Lindsey studies a mouse model, examining whether membrane receptors might make a good target for estrogen therapy, thereby restoring some of estrogen’s cardiovascular protection, which would otherwise be lost.

Since the grant was awarded, Lindsey’s work has been published in the American Journal of Physiology and Biology of Sex Differences. Lindsey also has a list of potential side projects that she’d like to explore with fellow Tulane colleagues.

In January she submitted a grant proposal in conjunction with the Tulane Brain Institute that looks at the amount of estrogen receptors expressed in the brain and vasculature. Another project, in early stages, will look for receptors expressed in endothelial cells. She also has potential projects in preparation with faculty members in the Department of Cell and Molecular Biology in the School of Science and Engineering, and the Department of Physiology within the School of Medicine.

She’s grateful for the multidimensional approach to her work.

“I tell my trainees only half the experiments you do are even going to work at all,” she said.

“And of those, only half are going to really be a result that was what you were hoping for, a result that you should pursue. So you’ve basically got to do four times as much work as you’re really expecting to get for the results.”

Asked if it is easy to get discouraged by those odds, Lindsey said the actual “win” of finding results that matter is secondary to helping actual people.

“I started out sort of in a field where I didn’t feel like what I was doing was going to be able to eventually improve human health or human experience. You have to think that what you’re doing is important.”

Tulane affords a unique chance to build on an investigator’s progress. Lindsey said she found support among colleagues whose research was in the same field as hers, as well as outside her realm of expertise.

“We have enough opportunities, and we have variety, so that you can sometimes find collaborations in places where you didn’t expect to find one.”

PATRICK DELAFONTAINE, MD
As the executive dean at the School of Medicine, Patrick Delafontaine, MD, will build research and clinical programs, grow service lines and develop clinical affiliations for Tulane’s hospitals and medical groups. It’s a very different role from the one he previously served at Tulane, when he was chief of cardiology, interim chair of the Department of Medicine and director of the Heart and Vascular Institute.

The common thread that runs throughout his career is he still practices as a cardiologist and conducts cardiovascular research, a role that will enable him to work with other investigators on projects that treat and prevent heart disease and stroke. This ease of collaboration drew him back to New Orleans from the University of Missouri School of Medicine. 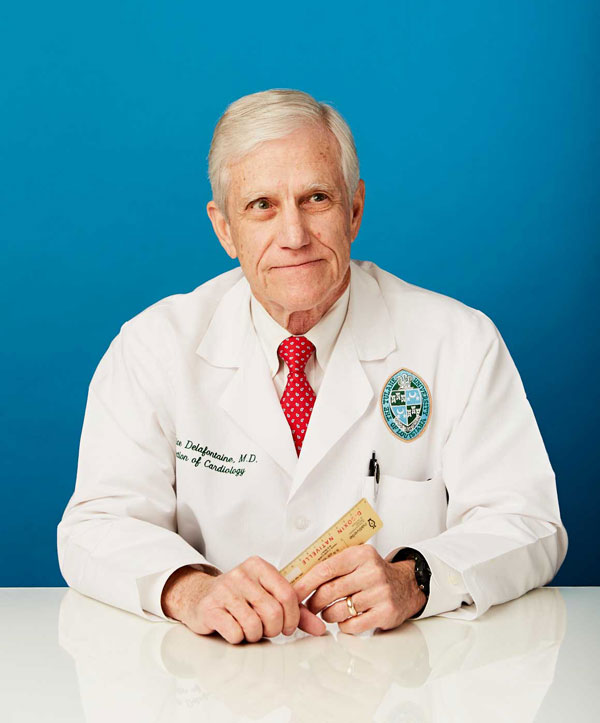 “Tulane is a rare university in that it has a school of engineering and a primate center, and a very strong school of public health, and that is somewhat unique,” he said. “Cardiovascular disease is rampant in this part of the country and is a real challenge for us. So that is an attraction for me as far as the relevance of our research. There’s a real need in the community.” Delafontaine, also a professor of medicine, said his lab will be part of the university’s overall mission to significantly increase its research impact, thereby doubling its NIH funding in the future.

In the fall of 2020, Delafontaine served as principal investigator of the Tulane testing site for Janssen Pharmaceutical Companies of Johnson & Johnson’s Phase III clinical research study of a COVID-19 vaccine.

“Our goal is to significantly elevate the research prominence of the school, and also increase the clinical footprint of the school. And the two go together,” he noted. “We will have to continue to develop collaborations between different groups, because that’s what allows innovative research and large projects, such as program project grants, to develop.”

His research lab works in two major areas: how to treat and prevent heart attacks, with a focus on identifying and understanding the biology of atherosclerotic vulnerable plaques that trigger heart attacks, and how to prevent the wasting of skeletal muscle mass in patients with chronic disease, especially cardiovascular disease.

Delafontaine anticipates collaborations with the Tulane National Primate Research Center, where there is already an ongoing effort to understand cardiovascular disease development in animals with chronic HIV infection. And he has already found synergies with Professor of Medicine Nassir Marrouche, MD, who studies atrial fibrillation and with whom he hopes to set up an advanced MRI research laboratory, which will also serve investigators around the university, in particular those with the Tulane Brain Institute.

Another potential collaboration resulted from a recent Research Synergy Event, at which he discovered another Tulane researcher, Wu-Min Deng, who also studies muscle atrophy — in fruit flies. “He’s studying cancer and effects on muscle wasting in a fly. We’re doing larger animals, but the [wasting] mechanisms could well be very similar. I had no idea that you could study muscle loss at that level,” Delafontaine said.

Being a physician-scientist is a natural fit for his work, and for the university.

“I’m one of these people that has done clinical work my whole career, and I couldn’t imagine just doing the research,” Delafontaine said. “We’re doing it for the patients; taking care of patients — that’s a great satisfaction for me.”