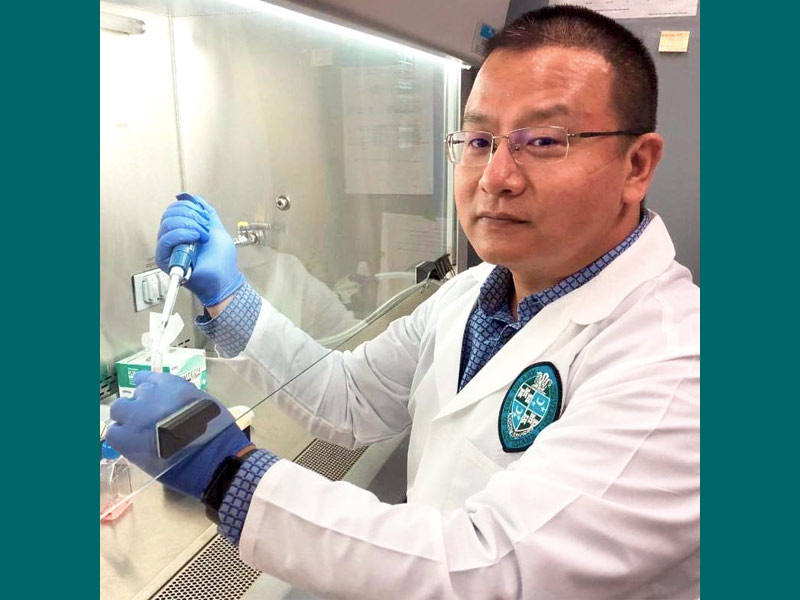 Scientists estimate that approximately 15% of human cancers worldwide are caused by viruses.

Dr. Zhen Lin, associate professor of pathology at the School of Medicine, and his lab team have focused their research on human immunodeficiency virus (HIV)-associated malignancies, particularly lung cancer, and he was recently awarded a five-year, $1.74 million National Cancer Institute grant to study the connection between human papillomavirus (HPV) and lung cancer development in HIV-positive patients.

HPV is the most common sexually transmitted infection. It has been linked to cervical and head and neck cancers. Lin and his team have found that HPV might also play a role in HIV-associated lung cancer.

Lung cancer is one of the most common cancers among those living with HIV. It accounts for approximately 21% of cancer-related deaths in this group. The reasons for this are still unclear. Although smoking is a key risk factor, HIV-positive individuals are more than four times more likely to develop lung cancer even after statistically factoring in smoking status, indicating other factors are responsible for the increased incidence.

To explore any potential viral connection, Lin analyzed genetic sequencing data sets for over 1,000 lung cancer samples. “Our findings show that HPV is closely linked with HIV-associated lung cancer and likely plays a role in lung cancer development in this population,” Lin said. “This is a novel finding. No one has previously reported on this connection in the HIV cancer research field.”

The investigations supported by this new grant are designed to test this hypothesis by determining the potential causal role of HPV in HIV-associated lung cancer as well as the mechanism through which HPV contributes to this deadly disease. “When we better understand the mechanism, we can develop better therapeutic strategies to target the viral oncogenic process and control and manage existing lung cancer in this patient population,” said Lin.

Another overarching goal of the project is to explore ways to prevent lung cancer from developing in the first place. HIV-positive individuals tend to have a higher incidence of HPV coinfection. Lin and his team theorize that the HPV vaccine could reduce the onset of HIV-associated lung cancer in this population as well. “That’s another aspect of this project with potential clinical significance,” said Lin. “Validating this connection can perhaps help us reduce future lung cancer cases through vaccination.”