Rumors of a “Katrina cough” started circulating in New Orleans as soon as people began clearing debris, gutting houses and rebuilding after the hurricane in August 2005. Is this a respiratory complaint caused by breathing polluted dust, is it only seasonal allergies, and does it cause long-term changes in respiratory health? A researcher in the Tulane School of Medicine seeks answers. 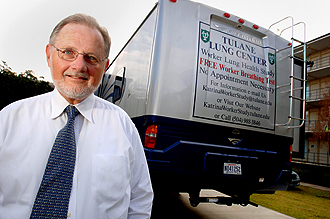 Henry Glindmeyer, a professor of pulmonary, critical care and environmental medicine at Tulane, will use a mobile lab to examine 1,000 workers in New Orleans to determine their lung health after Hurricane Katrina. (Photo by Paula Burch-Celentano)

Henry Glindmeyer is carrying out a five-year study to determine if workers in New Orleans face risks from inhalant exposure to minute particles such as mold, fungi or bacteria. Glindmeyer is a professor of pulmonary, critical care and environmental medicine at Tulane.

The study is funded by the National Institute for Occupational Safety and Health, an agency of the Centers for Disease Control and Prevention, which is providing $1.86 million.

Glindmeyer will gather data annually from approximately 1,000 workers. Tulane is partnering with large employers in the New Orleans area with numerous workers on their payrolls, including the City of New Orleans.

The testing is non-invasive (no needles) and consists of a respiratory and occupational questionnaire, a breathing test and exposure monitoring. Health data will be collected in a mobile lab that will be brought to the workers at their worksites. Study participation is voluntary and confidential.

“The participants will tell us where they work, where they live, what they do, and the type of dust-generating activities they may be in or around,” says Glindmeyer.

The annual respiratory exposure assessment uses a small monitor that is worn at work for about five to six hours.

“The monitor uses a filter to capture 'thoracic dust,' or dust small enough to get deep into the lungs,” Glindmeyer says.

Samples will be analyzed for airborne dust, bacteria and mold. The purpose is to measure exposure associated with specific work activities.

“We will construct an exposure profile for each participant, and investigate associations between exposure, change in lung function, and changes in respiratory symptoms or conditions, such as exacerbation of asthma or worsening of upper or lower respiratory symptoms,” Glindmeyer says.

The Katrina worker study is the latest in a long list of respiratory studies of occupational inhalant exposures that have been conducted by Glindmeyer and his associates over the last 35 years.

For more information about the study, go to the study Web site, e-mail KatrinaWorkerStudy@tulane.edu or phone 504-988-3846.