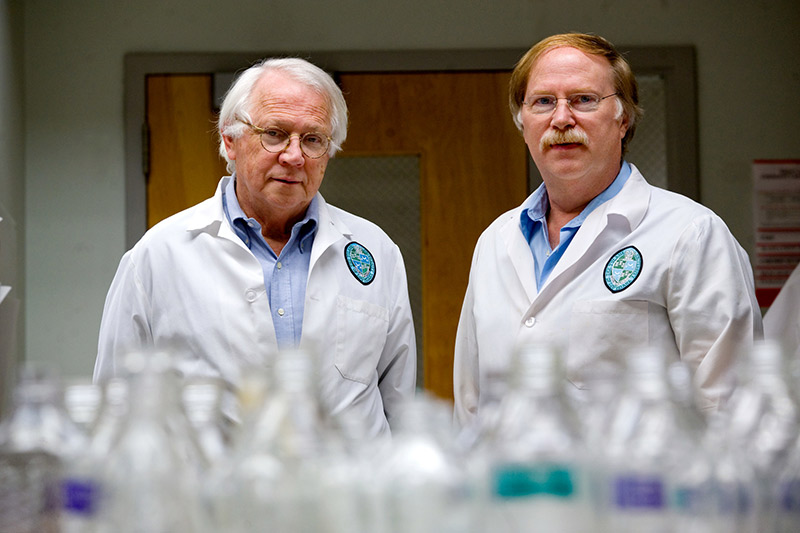 James Robinson (left) and Robert Garry have tracked the Lassa virus for more than a decade. (Photo by Paula Burch-Celentano)

Twelve years ago, Robert Garry first suggested that his team at Tulane University School of Medicine could unlock the secrets of the mysterious Lassa virus.

Some researchers were skeptical. “They thought it was too difficult,” Garry said.

For starters, the trip from the closest airport to Tulane’s partners at the Kenema Government Hospital in Sierra Leone took 13 hours, driving over treacherously bumpy dirt roads. Tulane would have to draw blood samples from Lassa survivors at a lab in southern Nigeria and the hospital in Kenema, freeze the samples, then keep them frozen for another long bumpy ride and a trans-Atlantic flight to New Orleans.

Once those practical concerns were overcome, Tulane researchers were faced with a virus that science knew very little about in 2005.

“This virus was an enigma,” said Garry’s longtime colleague, Dr. James Robinson, a professor of pediatrics. “We knew it occurred and that people either died or got better.”

“Before we started, no one knew what the proteins of Lassa virus looked like,” said Garry, a professor of microbiology and immunology. “We knew little about how the immune system responded to the virus. And we didn’t know if our tests would work.”

A few years ago, the Tulane team grieved and suffered setbacks after Kenema’s hospital became ground zero for an explosive outbreak of Ebola virus, a highly contagious hemorrhagic fever whose initial symptoms look similar to Lassa in patients. Despite protective gear, 11 of the hospital’s staff were infected; several died, including the chief nurse and the doctor in charge of the Lassa fever program.

This article appeared first in the September 2017 issue of Tulane magazine. Continue to full article.