Obesity is a serious health risk, increasing the chances of millions for developing diabetes, cardiovascular disease or cancer. Tulane University researchers are engaged in a study focusing on why some people become obese and others do not. 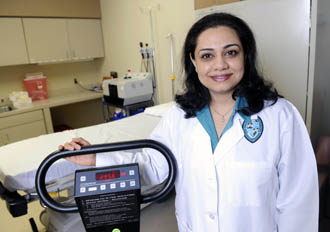 Dr. Tina Thethi, assistant professor of endocrinology, is principal investigator of a study examining why some people become obese and others do not. (Photo by Cheryl Gerber)

The study aims to characterize the genetic relationships between race, gender and obesity, according to Dr. Tina Thethi, assistant professor of endocrinology and principal investigator. The researchers are looking at the operations of the endocannabinoid system, a recently discovered endocrine system that has a role in regulating appetite.

“There is some preliminary data that obesity and the endocannabinoid system is different among ethnic groups,” explains Dr. Vivian Fonseca, who holds the Tullis-Tulane Alumni Chair in Diabetes at Tulane. “Our varied population in New Orleans, with a lot of obesity, gives us a unique opportunity to study this.”

Thethi and her colleagues are currently recruiting residents of New Orleans and surrounding parishes to participate in the study. “The study kicked off in July 2008 and we will continue to recruit participants until we have seen 700,” Thethi says.

“We're looking at two of the hormones that we know are high in people who are obese and actually stimulate food intake, and we're looking at that part of the gene that is supposed to turn off these hormones,” says Thethi. “The main purpose in doing the study is to characterize the differences between men and women and African-Americans and Caucasians, because I'm not sure we know the differences between these groups.”

Participants make a single visit to one of the two approved clinics. “We are having people coming in fasting,” Thethi says. The study team performs a physical exam, notes what medications the individual is taking, draws blood, and collects a urine sample.

The researchers are looking in particular at the workings of two hormones called anandamide and 2-arachidonoyl-glycerol.

“These endocannabinoids are hormones that actually stimulate food intake,” says Thethi. “There has been data showing that these hormones exist in different levels among people who are obese versus lean. So, if a person has a higher level of these hormones, a person would be eating more and would be more likely to be obese.”

The Tulane/Xavier National Center of Excellence in Women's Health presented Thethi with a Building Interdisciplinary Research Careers in Women's Health award for this research. Funding for the award comes from the National Institutes of Health.

The study is funded by the Tulane Research Enhancement fund, and it is a unique collaborative effort among specialists in many Tulane schools including the School of Science and Engineering, the School of Public Health and Tropical Medicine and the School of Medicine.

For more information or to participate in the study, contact Sharice Leger at 504-988-0543.