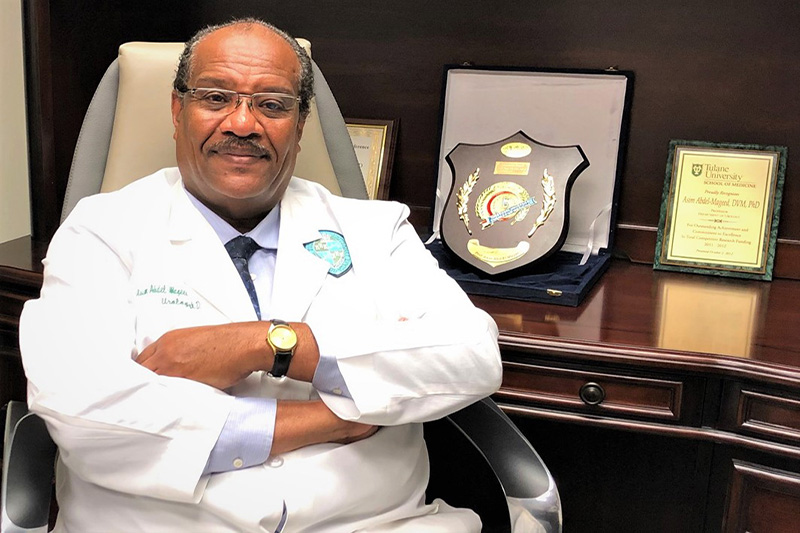 Asim Abdel-Mageed, DVM, PhD, professor of urology and Marguerite Main Zimmerman Professor of Cancer Research at the Tulane School of Medicine, was recently honored by the journal ‘Scientific Reports’ for authoring one of the top 100 accessed oncology papers for the journal in 2018. (Photo by Tulane Cancer Center)

Asim Abdel-Mageed, DVM, PhD, professor of urology and Marguerite Main Zimmerman Professor of Cancer Research at the Tulane School of Medicine, was recently honored by the journal Scientific Reports for authoring one of the top 100 accessed oncology papers for the journal in 2018.

His publication, High-throughput screening identified selective inhibitors of exosome biogenesis and secretion: a drug repurposing strategy for advanced cancer, received 3,154 article views, placing it seventh on the list, which features authors from around the world whose papers highlight valuable research in oncology.

The article reveals the results of research supported by a $4.2 million National Institutes of Health grant awarded to Abdel-Mageed in 2014. His project involved using a rapid high-volume robotic screening technique to investigate drugs already approved by the Food and Drug Administration (FDA) to treat a large variety of diseases or conditions to see which, if any, could also be effective in preventing prostate cancer metastasis.

For cancer cells to spread to other places in the body — or metastasize — they need to communicate with resident and recruited cells, such as stem cells. One way they do this is through biomolecular messages delivered in exosome cargos. Exosomes are molecules that carry information from cell to cell. “They are routinely biosynthesized and released by cancer cells, including prostate cancer, and are implicated in cancer progression,” said Abdel-Mageed.

Currently there are no known drugs that selectively target and inhibit the biosynthesis and release of exosomes by tumor cells. To accelerate the discovery of effective drugs, Abdel-Mageed and his team, in partnership with investigators at the National Center for Advancing Translational Science, investigated 4,580 known pharmacologically active compounds and found that 22 — including antibiotics, antifungal medicines and anti-inflammatory agents — were effective in preventing advanced prostate tumor cells from releasing exosomes or in blocking their production.

Since the Scientific Reports publication, subsequent research by Abdel-Mageed’s team has further narrowed their investigation to five of these agents, and he hopes in the near future to receive additional funding to support this work.

“Drug repurposing is a golden opportunity,” said Abdel-Mageed. “Because drug discovery from concept to market takes an average time of 12 years, our identified drugs, which are already human approved, could be repurposed for the treatment of advanced prostate cancer within a relatively short period of time. It represents a quick way of adding an adjuvant therapy to existing therapies that might curb the progression of cancer.”

As a steering committee member of the National Institutes of Health Extracellular RNA Communication Consortium (ERCC), a summary of Abdel-Mageed’s study was also published as part of the ERCC leading-edge perspective paper in Cell.