Researchers to study whether plants under stress are healthier to eat 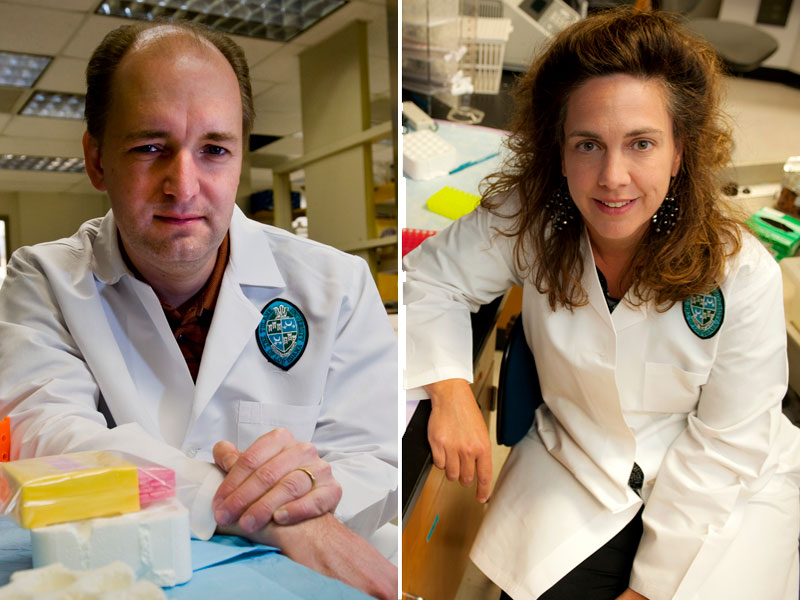 Matthew Burow and Dr. Bridgette Collins Burow, both professors at the School of Medicine, are working on a new collaboration with the U.S. Department of Agriculture to investigate whether plants under moderate stress produce compounds that can offer health benefits to those who eat those plants. (Photos by Paula Burch-Celentano)

Just like humans, plants have biologic responses to stress. Bacterial or fungal infection, UV light, drought, nutrient changes – too much of any of these can be lethal to plants. But exposure to these same stressors in moderation can be beneficial to both the plants and the humans who eat them.

In response to stress, plants produce biologically active compounds called phytoalexins. These compounds have been investigated not only for their role in plant defense, but also as possible nutritional components in human foods. Scientists believe these plant compounds could possess key beneficial properties such as antioxidant and anti-inflammatory activity, cholesterol-lowering ability and even cancer prevention potential.

“It’s like an adaptive immune response,” said Matthew Burow, associate professor of medicine at the School of Medicine. “When a plant is stressed, it creates these compounds in an effort to survive. They are beneficial to the plant. But how do they impact human cells, and can they be mechanisms for improving human health and preventing cancer?”

That’s one of the questions Burow and his team hope to answer through a federally funded collaboration with the U.S. Department of Agriculture. Burow is Tulane’s leader on the project and will work with Stephen Boue, research chemist at the USDA Southern Regional Research Center (SRRC) in New Orleans, and colleagues at Xavier University. Dr. Bridgette Collins-Burow, associate professor of medicine at the School of Medicine, is co-leader on the collaboration.

“This project has a very broad mandate,” said Burow. “We’re looking at the concept of activated foods – rich in stress-induced phytoalexins – and whether they may play a role in the regulation of human health and disease, including cancer biology.”

During the first few years of the project, Burow and his team will focus on cell-based assays. Boue will grow and stress rice and soy plants to elicit the phytoalexins and then isolate them in his lab at the SRRC, and Burow and his team will then test those compounds for effects on human cells, including cell signaling, gene expression pathways, anti-cancer activity, inflammation markers, antioxidant responses, etc.

“As we progress, we hope to develop actual diets that could play a role in preventing cancer in rodent and primate models,” said Burow.

This collaboration and funding builds on previous partnerships between Tulane University, Xavier University, and the USDA-SRRC. “In our previous project, we focused on one particular class of compounds from soy and observed changes in breast cancer and adipose tissues in mice and primates that showed potential cancer prevention effects,” said Burow. Unfortunately, the budget for that project ended before they could complete the cancer prevention studies.

Long term, the team hopes this work will lead to clinical trials for dietary chemoprevention in humans. “We want to determine whether someone can alter their diet in a subtle way to include an elicited food and induce a long-term health benefit, like cancer prevention. It's a way to take normally healthy food and make it even more healthy, so you get more bang for your buck, so to speak,” said Burow.

In addition to soy, Burow and his team will test phytoalexins from rice, sugarcane, and other beans native to Louisiana. “This money is coming to Louisiana, so our focus is on Louisiana crops.”