Tulane researcher Brian Rowan and his team are tackling the problem of triple-negative breast cancer, which is particularly aggressive and difficult to treat effectively. They are testing a promising new drug that is showing positive results in preclinical trials and could be tested on breast cancer patients in New Orleans by 2010. 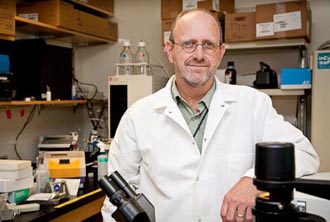 Researchers have learned that there are several subtypes of breast cancer, largely defined by the presence or lack of three targets known to promote tumor growth  estrogen, progesterone and HER2 receptors. Many of the most successful breast cancer treatments target these receptors in tumors.

Triple-negative breast cancer, as its name implies, does not contain these three targets. This fact eliminates the more effective receptor-targeted therapies as treatment options and limits therapeutic choices for these patients to surgery, radiation and chemotherapy.

In addition to the limited treatment options, triple-negative breast cancers are more likely to recur and metastasize than other breast cancer subtypes and have a higher incidence rate among African American women. The majority of cases occur in younger women.

Rowan is taking a collaborative approach  working with surgeons, pathologists, oncologists and other basic scientists  to identify new drug targets for attacking these unique tumors. And they may be on to something. They noticed that the expression of a protein called Src kinase is elevated in triple-negative breast cancer cells. Src is required for tumor growth. If they can develop drugs that block Src, they should be able to block the tumor growth as well.

Rowan and his team are working with Kinex Pharmaceuticals in Buffalo, N.Y., to test a new Src inhibitor called KX-01. Phase I trials for this new drug are complete and preliminary results indicate that KX-01 kills triple-negative breast cancer cells in both Petri dishes and in animal tumor models. “KX-01 in combination with chemotherapy kills even more cancer cells,” said Rowan. By 2010, he hopes to begin Phase II trials for KX-01 alone or in combination with chemotherapy for triple-negative breast cancer patients here in New Orleans.

“Dr. Rowan has earned this honor not only because of the outstanding quality of his work, but also because of his many additional contributions, such as mentoring junior faculty, organizing group meetings and forming productive collaborations to explore new research focuses,” said Deininger.

Melanie Cross is communications manager at the Tulane Cancer Center.