Tulane head baseball coach Rick Jones will be getting his passport ready for international travel next summer as he leads the 2009 USA Baseball National Collegiate Team to games in Japan, Taiwan and the Netherlands. 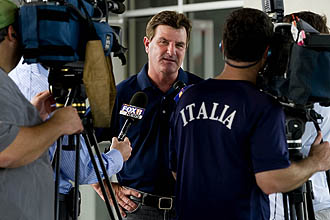 Tulane head baseball coach Rick Jones is interviewed at a news conference on Tuesday (July 8) announcing he will be head coach of the 2009 USA Baseball National Collegiate Team. (Photo by Paula Burch-Celentano)

At a press conference on Tuesday (July 8), USA Baseball announced Jones as head coach of the national team, and Jones responded, “This is one of the things that means a lot to me  to represent our country at the highest level of international amateur competition.”

Jones is coming off a 2008 campaign that was his 15th at the helm of the Green Wave baseball program. During his career at Tulane, Jones has tallied a 639-306-2 record, including a 257-127-2 mark in Conference USA play, which is more wins than any other league school.

Inheriting a team that had been to the NCAA Regionals seven times in its previous 101 years of existence, Jones took the Green Wave to the postseason in his first season, again in 1996 and every year from 1998 to 2006.

“This is a tremendous honor and I am very excited to represent our country as the head coach of the USA Baseball National Team,” Jones said. “Having been an assistant coach on the 1989 Presidential Cup squad and with the 1990 national team, I fully understand what a privilege and responsibility it is to put on the hat and jersey with our stars and stripes. I am looking forward to the 2009 tour in the states and abroad, and leading our nation's best players. This is a great opportunity for me to represent our country and Tulane University.”

Jones' work with the national team will begin this fall with the selection of three assistant coaches to his staff, followed by the selection process for the team that will continue throughout next spring.

He is especially looking forward to working with 22 of the nation's best collegiate players who will be rising sophomores and juniors.

“When you are the coach of USA Baseball's National Team you are coaching an elite group of college players who are going to be major league players for a long time,” he said.

Jones was part of the 1990 USA Baseball National Team coaching staff where he served as the squad's pitching coach and recruiting coordinator. He helped lead Team USA to a bronze medal at the Goodwill Games and a silver medal at the Presidential Cup in Taiwan.

“It's wonderful having Rick involved with the National Team program again,” said Eric Campbell, general manager of the USA Baseball National Team. “His international experience will be invaluable as we begin to lay the groundwork for the 2009 team.”