In a watershed ruling, the U.S. Supreme Court on Thursday (June 26) upheld a lower court ruling that a 1976 Washington, D.C., gun law, which bans the ownership of handguns, violates the Second Amendment. Ray Diamond, a Tulane constitutional law professor who has written extensively on the Second Amendment, says that for the first time in the court's history, the ruling establishes with certainty that gun ownership is an individual right. 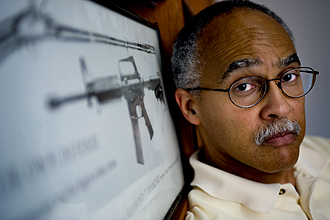 Tulane law professor Ray Diamond says this is the first time the U.S. Supreme Court has declared the right to bear arms as an individual right that is subject to regulation. (Photo by Paula Burch-Celentano)

“Part of what Justice Scalia says in this opinion is that it is a historical or original understanding of the Second Amendment; that it protects an individual right to bear arms,” says Diamond, the John Koerner Professor of Law. “This is the first time the Supreme Court has declared, unequivocally, that the Second Amendment guarantees an individual right to gun ownership.”

Diamond says this is not the first time the high court has ruled on the Second Amendment. In 1939 in U.S. vs. Miller, the court took up the issue of what kinds of guns are protected, but it differed from the recent ruling in many ways.

“What that case did was to parse or decide the constitutionality of the National Firearms Act, as it banned private ownership of sawed-off shotguns,” Diamond says. “What the court said was that weapons that were not useful for military purposes were not protected under the Second Amendment. What it didn't do is to decide whether the right is an individual right or a collective right.”

While proponents of gun ownership are hailing this ruling as vindication, Diamond says he predicts there will be further cases in front of the court in the future.

“What it does is invite later litigation,” Diamond says. “It's been since 1939, and I certainly wouldn't expect it to be another 69 years before we have the next case.”

Diamond says that while the ruling does support the individual right to bear arms, it opens the door for regulation.

“It says this is an individual right, not a collective right,” says Diamond. “It also gives to the other side as well, where it says the right is subject to regulation. As to what regulations are acceptable and what aren't, the court doesn't give us that standard, except to say it's not going to be the lowest standard.”

The 5-4 majority ruling did not surprise Diamond, who says the writing was clearly on the wall before the ruling.

“The oral argument signaled four of the five leaned toward an individual right [to bear arms],” Diamond says. “And Justice Thomas, who ordinarily asks no questions at oral arguments, had already signaled his leanings in other cases involving guns.”

Of course, this being a presidential election year, there are implications about the direction of the court depending on which presidential candidate is voted into office.