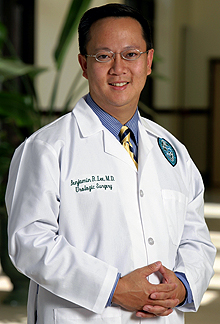 Robotic surgery allows the surgeon a 3D view of the surgical field as well as unequaled dexterity, maneuverability and precise control, says Lee, a professor of urology in the School of Medicine. Using a console to direct a surgical robot, Lee removes only the cancerous tissue from the kidney plus a small margin of normal tissue, and then repairs the defect in the remaining normal kidney tissue. This approach allows 50 to 75 percent of the kidney to be spared and puts less stress on the remaining kidney.

“This remnant of kidney is enough to keep the patient off dialysis if anything adverse happened to the other kidney,” says Lee, who has extensive experience with minimally invasive approaches to treating kidney and prostate cancer, and specializes in robotic urologic cancer surgery. Robotic partial nephrectomy, as the operation is called, is the most technically difficult procedure for kidney surgery, Lee adds.

According to the American Cancer Society, more than 50,000 people were diagnosed with kidney cancer last year and more than 200,000 kidney cancer survivors are living in the United States now.

Lee has pioneered several innovative surgical techniques in the treatment of kidney and prostate cancer, and he is the author of more than 250 manuscripts and abstracts. Before coming to Tulane, he served as director of the section of laparoscopy at the North Shore-Long Island Jewish Medical Center, New Hyde Park, N.Y., and brings advanced skills to Louisiana. A diplomate of the American Board of Urology, Lee's research has been recognized by awards from the American Urological Association, the Endourological Society and the Journal of Urology. He serves on the editorial board of the Journal of Endourology.

At the 26th World Congress of Endourology in Shanghai, China, this past November, Lee was the winner of the Arthur D. Smith Endourology Lectureship, known as the “Arthur” Award. Lee received the award as the urologist who has made significant contributions to the discipline of urology. The Endourological Society recognized Lee for his expertise in state-of-the-art techniques for minimally invasive urological surgery, particularly laparoscopy and robotic surgery.