To Romania With Love

They went for adventure and to do some good in a remote corner of Europe. When the cadre of medical students and doctors rolled into a rural Romanian village, the townspeople closed the school so all the children could attend a makeshift clinic. Ten medical students, five physicians and two nurses from Tulane took 10 days to travel from village to village during spring break. 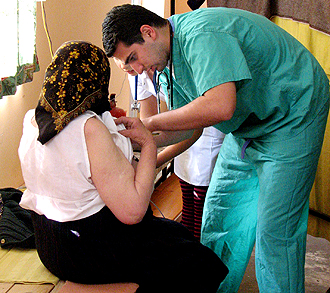 The Tulane contingent worked in partnership with Romanian medical students and physicians.

As they visited remote villages in the northeastern part of Romania, the medical team concentrated on detecting and treating pediatric problems, diagnosing heart problems, screening for cancer and providing Pap tests for the women, because specialty care is particularly scarce.

“Some of these villagers may have seen a family doctor once or twice in their lives,” says Sina Pourtaheri, a third-year medical student from New Orleans who played a leading role in organizing Tulane Outreach to Romania.

It was the first time in Romania for Dr. Hosea Doucet, professor and chief of general academic pediatrics.

“We probably saw 200 to 300 children,” Doucet says. “There's terrible dental caries because the children drink well water and there is no fluoride. It was winter there, so we treated a lot of ear and respiratory infections, skin disorders and parasites  big, pencil-sized worms. They're rural, farm people.”

Cardiologist Mark Cassidy says it was the first medical mission of this type for him. More than 100 villagers received heart evaluations.

“There was a great deal of untreated severe hypertension,” Cassidy says. “We saw a person with uncontrolled hypertension and an aneurysm; it's potentially lethal.” According to Pourtaheri, six people were diagnosed with heart valve problems that will require surgery. Now the Tulane and Romanian medical students are working to arrange the necessary operations. 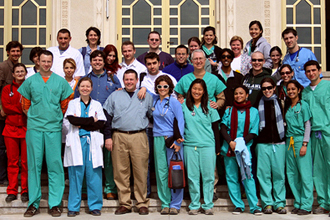 Tulane medical students and doctors gather with their Romanian counterparts outside the monastery where they lived during their time in Europe.

“It was a terrific experience to see another culture with more rudimentary health care, and a great opportunity for the medical students to learn and gain experience with autonomy under supervision,” Doucet adds. “I wish every medical student could go.”

Tulane medical students held fund-raisers to offset the cost of the trip and the group stayed in a monastery.

Murariu, who grew up in Illinois, is of Romanian descent and speaks Romanian fluently, evident in the public television interview he gave during the trip. Murariu and Pourtaheri met as undergraduates at Tulane.

These students were selected because there are interested in international health, many of them are in the joint MD/MPH program with the Tulane School of Public Health, and they have been volunteers in other activities, says Pourtaheri, who serves as president of the outreach.