Rooting Out the Source of Pain

Though pain can be the result of an external injury or an internal cause such as shingles, sickle cell or AIDS, the degree of pain a person experiences often is intensified by psychological issues. To provide a mind-body approach to pain management, Tulane Medical Center has opened a Pain Management Center at Tulane-Lakeside Hospital in Metairie, La. 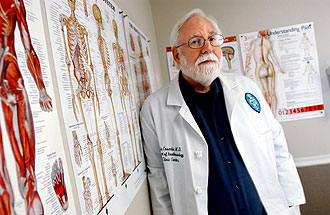 The new center, which opened this spring, offers an integrated spectrum of medical and psychological treatments.

In New Orleans, where the majority of residents experienced tremendous personal losses after Hurricane Katrina, post-traumatic stress complicates every case, says Dr. Dennis Coombs, director of the Tulane Pain Management Center and a trained anesthesiologist. Coombs is a clinical professor of anesthesiology in the Tulane School of Medicine.

“Our job is to evaluate people for the underlying origin of the pain and find a solution,” says Coombs.

Coombs' first step is a thorough evaluation of the patient's physical health and current pain symptoms. He uses injections to isolate the source of the pain and learn what can be done either to relieve the pain or to reduce the symptoms' intensity to a manageable level through a variety of techniques, including electrical stimulation, targeted drug delivery or nonaddictive medications.

One of Coombs' patients, Peter Baricev Jr., 60, director of real estate at Tulane, came to the center in April, complaining of debilitating pain. Baricev had first experienced pain in his 20s, having sustained injuries from playing high-impact sports in high school. He was forced to give up his career in architecture when he ended up in traction for two weeks from leaning over a drawing board for hours at a time. His spinal discs were compressed and pushed against nerves, causing loss of motor control on his left side.

Baricev transitioned into the business side of building management while moderating chronic pain through medications. Though physically fit, he hit a wall in April 2006.

“I was running a thousand miles an hour and felt terrible,” recalls Baricev. In a post-Katrina world, he had been trying to accomplish the same quality work while facing higher costs with fewer resources. “Katrina got the best of me.”

“The pain was like lightning going through my leg,” he says. His spinal discs had lost fluid, so bone was rubbing against bone. A Tulane neurologist referred him to Coombs, who did a thorough evaluation and administered an epidural. Baricev says he felt almost complete relief within four days.

“Dennis Coombs nailed it,” says Baricev, who is now free from painkillers for the first time in 40 years.