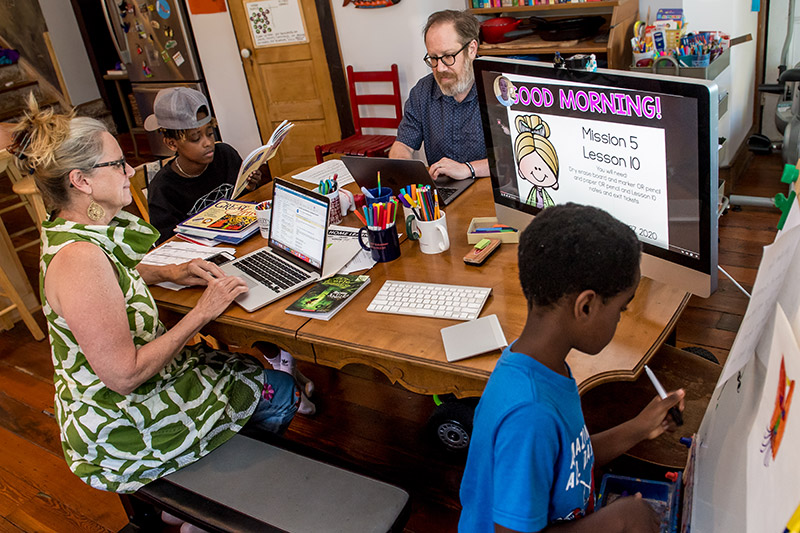 Edith and Justin Wolfe, professors in the Tulane School of Liberal Arts, prepare for class while their two sons, Mose, 13, left, and Maceo, 7, work on their own activities. (Photo by Sally Asher)

Ever since the COVID-19 pandemic forced Tulane University professors to move their teaching responsibilities from the classroom to their computers, Justin and Edith Wolfe knew they would have to get creative if they wanted to stay sane.

They were confident they could master this new normal as academics. But as parents of children, Maceo, 7, and Mose, 13, also learning from home, they wondered if they would survive the predicted pandemonium.

"The nature of the current reality forces me to share my commitment to Tulane, my students and my family. So far I think we are making that work."

“Things are good,” said Justin Wolfe,  the William Arceneaux Professor of Latin American History. ”We feel unbelievably fortunate compared to so many in the community who are struggling to make ends meet and finding themselves having to risk their health by going out just to get by.”

“As a family, we try to keep a routine,” said Edith Wolfe, assistant director for undergraduate programs at the Stone Center for Latin American Studies. “We walk the dog together at the same time, we eat lunch at the same time, I do an art project with our 7-year-old after lunch and we all try to get out in the fresh air for an hour or so before dinner.”

That doesn’t mean the Wolfe household is without its challenges. While Mose, a seventh-grader, is fairly independent when it comes to school work, Maceo needs much more attention and supervision. It’s time consuming, Edith said, but she and Justin try to pull double duty – alternating in watching over Maceo while doing their own class preparation.

“Many have a relation to Tulane, one way or another,” Edith said. “We check in and introduce ourselves, write for an hour, check in in small groups to discuss our progress and challenges midway through, write for another hour, then check out. It has been fantastic in providing routine and sanity.”

While teaching via Zoom has not been ideal, they have found ways to make it work. Edith’s class, for example, was scheduled to travel to Oaxaca, Mexico over spring break to curate an exhibition for the Newcomb Art Museum (NAM).

“Now we are teaching them about museum principles and they’ll curate a virtual exhibition,” she said. “The Museum staff has really come to bat and are helping the class mount an on-line exhibition instead of the physical one the kids would have organized. The students are communicating with our partners in Oaxaca and conducting group research. This will be the only exhibition the NAM inaugurates in the foreseeable future, so it’s a big deal – for us and them.”

They also make time for students to express their emotions and feelings as they deal with everything from missing campus life and their friends to worrying about loved ones who are either on the front lines of the pandemic or who have contracted the virus themselves.

“Most seem to be coping well enough, but I can tell that some are struggling because of quarantine issues or cases of Covid-19 in their extended families,” Justin said. “I try to make sure we have space to talk about whatever they need and to let them know it’s OK to ask for help and to take care of themselves. The pressure of school is hard enough as it is, but add in the fear, isolation and uncertainty, and for some it may be nearly unbearable.”