Runsdorf recipients have a track record of service 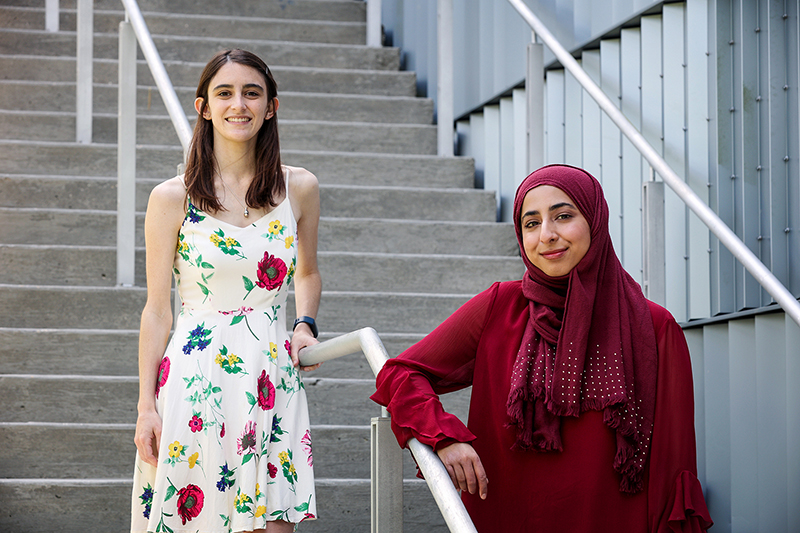 Margaret Conrad and Amna Ashraf, who are graduating with the Class of 2021, are recipients of the Jim Runsdorf Excellence in Public Service Student Award, given by the Center for Public Service. (Photo by Rusty Costanza)

The Center for Public Service (CPS) announced that Amna Ashraf and Margaret Conrad have received the Jim Runsdorf Excellence in Public Service Student Award for 2021. Ashraf and Conrad are both graduating with the Class of 2021.

The Jim Runsdorf Excellence in Public Service Student Award identifies and recognizes students who demonstrate social responsibility and awareness of the needs of the community through significant contributions during their undergraduate tenure at Tulane. These students should embody the best practices of civic engagement, be committed, compassionate leaders and show dedication to the rebuilding efforts in the city of New Orleans.

Both of this year’s Runsdorf recipients are from the New Orleans area and came to Tulane with previous volunteer experience and a commitment to serve the city.

Amna Ashraf is graduating with a Bachelor of Science in Public Health. While a freshman, she joined the CACTUS Academy and eventually transitioned into other roles at CPS such as the service learning assistant position and a Public Service Advisory Board member. Off-campus, Ashraf also volunteered with the Crisis Textline, the HandsOn New Orleans Volunteer Center, and other nonprofits in a variety of capacities.

“As a public health major, and also being in New Orleans for so long, I witnessed a lot growing up, but I didn’t have the toolbox to be able to talk about these issues. Service has allowed me to speak about my truth and my experiences,” she said. “When I started off at CPS, my approach towards service was a bit broad, over time I was given the tools and experiences to develop my understanding on key issues. As I continued my degree, I think I developed more of an awareness of service through a public health lens.”

Ashraf, who also worked as a research assistant in the School of Public Health, plans to take a gap year so that she can continue volunteering around New Orleans, but plans to apply to medical school in the future.

“We had to adapt this well-established program to COVID-19,” she said. “We kept everything on campus — we had virtual projects, we also had in-person projects. And we ended up having around 500 volunteers, 400 in person and about 100 online.”

“It was the first big service project that Tulane does every year,” she added, “and we really wanted to give freshmen the opportunity to help out New Orleans a little bit, even if we couldn’t send them [off campus] as we normally do.”

Conrad has also taught Latin to schoolchildren, volunteered in a local hospital, organized food drives after the Baton Rouge floods, and worked in food banks. She said Outreach Tulane helped her develop her leadership skills. She served as the chair of that organization’s 2020 event and also as president of Tulane’s Green Medicine Club.