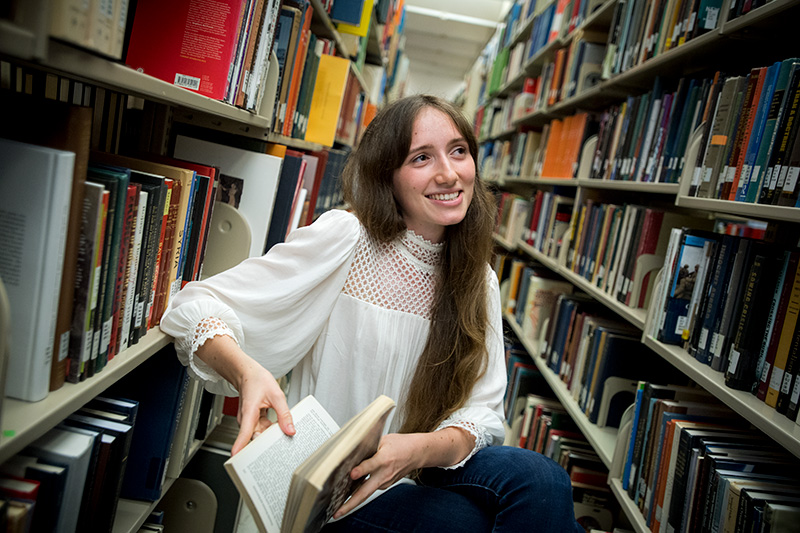 Sophia Kalashnikova Horowitz researched Turkology — the study of the modern history and culture of Turkey — as seen through the lens of Russian scholars during a trip to St. Petersburg. (Photograph by Paula Burch-Celentano)

When Associate Professor Yigit Akin recruited history major Sophia Kalashnikova Horowitz to translate a book written in Russian, the Tulane University student became curious about Russian scholars who lived during Josef Stalin’s regime. That project would eventually lead her down a path of research that revealed how Russia’s 1917 revolution and the Soviet Union’s 1991 collapse influenced the subject of Turkology — the study of the modern history and culture of Turkey — among Russian scholars.

Russia and Turkey have centuries of tense relations. “Exactly how did scholarly discussions [in the Soviet Union] reflect the turn from relative intellectual freedom in the 1920s to repression in the 1930s?” Horowitz, a senior in the School of Liberal Arts, considered. “Is it true, as some authors write, that Communist politics led to the ‘failure’ of Turkology in the USSR? My research … has really helped me formulate some of these answers.”

With a Dean Jean Danielson scholarship, Horowitz traveled to St. Petersburg to explore Turkology at the Institute of Oriental Manuscripts at the Russian Academy of Sciences.

“The discussions of these scholars revealed to me a whole new world of interactions of the way that scholarship and academia in the Soviet Union worked.”

Studying the primary literature in Russian, in which Horowitz is fluent, was critical. First the institute approved her request, but then they rejected it. Horowitz showed up anyway, only to be befriended by helpful archivists who generously made an exception for her and helped her get started.

At the institute, she read a variety of interpretations that “hinted at the pressures scholars were increasingly being subjected to [over the last century]. … The discussions of these scholars revealed to me a whole new world of interactions of the way that scholarship and academia in the Soviet Union worked,” she said.

She was also able to interview living Russian historians and draw conclusions on the legacy of Soviet regimes on current scholarship.

The project will form her senior honors thesis, Horowitz said. And she earned the admiration of the institute, which granted her a letter of affiliation that will allow her to continue the project for at least another year.