Salvaged Material: Window Into Musical Past

When the venerable musician and raconteur Danny Barker passed away in 1994, the New Orleans jazz community lost not only a great player but a great storyteller as well. Thanks to an ongoing effort to restore boxes of waterlogged material retrieved from his house after Hurricane Katrina, at least a portion of Barker's memorabilia has survived to tell its story of the city's distinct musical past. 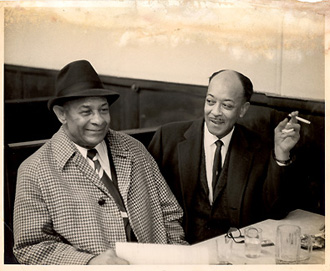 “Because researching popular culture is difficult, even the most obscure material can have great value,” says Bruce Raeburn, curator of the Hogan Jazz Archive at Tulane University. “Popular culture tends to be ephemeral, based on oral traditions, and doesn't leave the equivalent of State Department dossiers for historians to thumb through.”

Of particular interest, says Raeburn, is a collection of items belonging to the celebrated New Orleans drummer Paul Barbarin, who was Barker's uncle.

“Danny is highly revered,” says Raeburn, “but Barbarin is even more intricately related to the development of jazz.”

During his career, Barbarin performed with jazz legends such as Louis Armstrong, Jelly Roll Morton and Joe “King” Oliver. While Barbarin made a name for himself in the 1920s and '30s by playing in Chicago and New York City, he returned home to New Orleans in the late '30s.

“It is for this period that these materials are rich,” says Raeburn. “They include flyers for battles of the band, photographs and a lot of obscure, localized material that tells the day-to-day story of the music.” 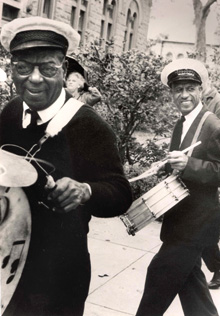 Paul Barbarin (left) performs with his Onward Brass Band in the 1960s. Barbarin was the uncle of Danny Barker. (Courtesy of the Hogan Jazz Archive, Tulane University)

While Barker's collection had many unique photographs, including one of Babarin's younger brother Louis (who also was a drummer), most of the images are at least partially damaged.

“A lot of things were stuck together, some had a chemical film on top,” says Raeburn. “Paper and ink tended to do better than photography.”

The Barker family had given the Hogan Jazz Archive permission to salvage the collection, which had remained in the house after Danny and his wife, Blue Lu, passed way in the 1990s.

The salvaged material was turned over to Belfor USA, the company contracted by Tulane after Katrina to restore its campuses.

With the help of one assistant, Raeburn continues the ongoing process of archiving the salvaged material. It's both a chore and a labor of love that begins with collating the material into descriptive categories and then housing them in suitable, acid-free archival containers, while at the same time generating a searchable inventory and other finding aids.

“It's an elaborate process,” says Raeburn. “We are still figuring out what we have. We've sorted through most of the Barbarin material, but we have a long way to go with Danny's stuff. It varied widely. Some of it is significant  photographs and some original manuscripts of his writing. He was not only a storyteller but a gifted writer.”