Brandon Policky knows a lot about fish. He knows a lot about trout to be more specific, and the Greenback Cutthroat Trout to be exact. A senior majoring in ecology and evolutionary biology, Policky garnered his knowledge about this particular endangered species of trout by working during the last three summers for the U.S. Forest Service in the mountains of Colorado. 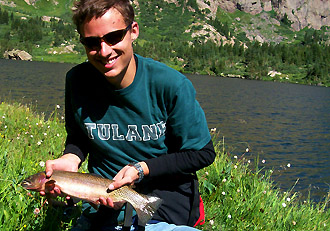 In the mountains of Colorado, Tulane senior Brandon Policky shows a Greenback Cutthroat Trout, an endangered species that has been the focus of his summers for the past three years. (Photo courtesy of Brandon Policky)

A Colorado native, Policky says he and his family always spent time outdoors, and he has long been interested in biology and fisheries. When it came time to get a summer job, he decided that flipping burgers or working in an office wasn't for him.

“I've been working for the U.S. Forest Service for three years as a biological science technician. It basically means I collect data to be processed for research at the forest service,” Policky says. “I worked on a reclamation project for the Greenback Cutthroat Trout, which is the state fish of Colorado. It is an endangered species and recent genetic analysis has shown that actually only three populations of this fish remain in the wild.”

The Greenback Cutthroat Trout is threatened due to the fact that during the mining boom of the 1900s, non-native species of fish were brought in by miners and stocked in lakes and streams as a source for food. The invasive species quickly drove the native fish higher into the mountains.

For the project, Policky rides on horseback into places most people would never go, in areas above 11,000 feet in the San Isabel National Forest.

“These fish exist in absolutely remote places that no one goes but us,” Policky says. “They're in a wilderness area that is accessible only by hiking and there are no trails. No one is going in there. Nobody knows we're there.”

Through the project efforts, the range of the habitat of the Greenback Cutthroat Trout has almost tripled from a paltry three miles to eleven miles. By setting up barriers downstream, the forest service has blocked the invasive species from preying on the Greenback.

Policky says that he thoroughly enjoys his work on the project, catching fish and measuring and weighing them before loading them onto horseback and descending the mountain slopes, where he helps to establish another population downstream that he hopes will combine with the original one 50 years from now.

“Our hope is they will come down and create a larger and more sustainable population over time,” Policky says. “Really this system is going to be very important in the coming years.”

Endangered species like the Greenback Cutthroat Trout offer undiscovered possibilities, says Policky. “There could be a cure for cancer there, or there could be some protein that would be useful in the future. So from a pharmaceutical standpoint, and from a very anthropocentric standpoint, I think we need to save these untapped resources that could prove useful.”

Policky says his passion for fish has been shaped and honed at Tulane by studying with Michael Blum, assistant professor of ecology and evolutionary biology. Blum runs a fisheries lab on the Tulane uptown campus in which Policky works during the academic year.

Policky is busy applying to doctoral programs and writing a grant proposal to the National Science Foundation. He sees himself going into academia, but says he will continue to work in the field, getting his hands dirty.

“I really enjoy this work. It's satisfying to help recover something that is rare and aid in the conservation,” Policky says. “I like the field work. That's the best part of being a biologist, seeing exotic places.”