As Washington, D.C., gets back to normal following the inauguration, and the first week of the Obama administration comes to an end, a new opportunity is just beginning for one member of the Tulane faculty. Jeff Stacey, assistant professor of political science, is starting a one-year stint as a scholar-in-residence at the U.S. Department of State. 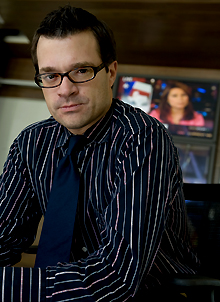 As he heads to the State Department for a year's appointment, assistant professor Jeff Stacey says, “I am going there to essentially get the kind of research access that I could not buy as an independent scholar.” (Photo by Paula Burch-Celentano)

The opportunity opened up after a few members of the State Department spent some time at Tulane.

“A couple of former diplomats in residence at Tulane had the office right next door,” Stacey says. “I learned a lot from both of them. One of them had been our ambassador in Zimbabwe and Angola the other came directly from Iraq, I got to know both of them very well, and they nominated me.”

While there, Stacey will wear multiple hats. Though he will spend most of his time researching an upcoming book, he also will offer analysis on U.S. foreign policy.

“I am going there to essentially get the kind of research access that I could not buy as an independent scholar,” Stacey says. “My next book project is about military occupations  U.S. and British  a comparative study seeking to explain what causes failed ones and what leads to successful ones.”

On the foreign policy side, Stacey will be attached to a new office at the State Department, the Office of the Secretary's Coordinator on Reconstruction and Stabilization.

“It's the first installment of the Obama revolution in U.S. foreign policy. I call it the 'failed states shop' for short,” says Stacey. “Its mission is to solve the dilemmas about the current batch of failed states  Iraq, Afghanistan and Pakistan  and prevent new occurrences of 'failed state-ism'.”

Stacey says he's excited to work under the new administration and new Secretary of State Hillary Clinton. He says he is confident that she will adapt to her new role quickly after seeing her work tirelessly as New York senator. At the same time, he sees a certain bit of humor in the appointment.

“I would not have chosen her because she lacks the experience compared to other people like Bill Richardson, but I know that she is brilliant and can get up a learning curve as quickly as anyone,” Stacey says of his new boss. “The irony of course is that she is the one that accused the president-elect of naivetÃ©, saying don't talk to enemies  well, guess who's going to be doing all the talking?”

Stacey recognizes that he will get real-world experience working with the U.S. government  opportunities like getting boots on the ground in the Middle East. He also sees opportunities for the university as well.

“My hope is that the Tulane community will benefit from this directly in terms of having somebody who is publishing this material. I will also have future ideas, contacts and an ability to bring people here that I get to know though this process,” Stacey adds. “I'm very grateful that the university has been so supportive. It's an exciting time to go.”