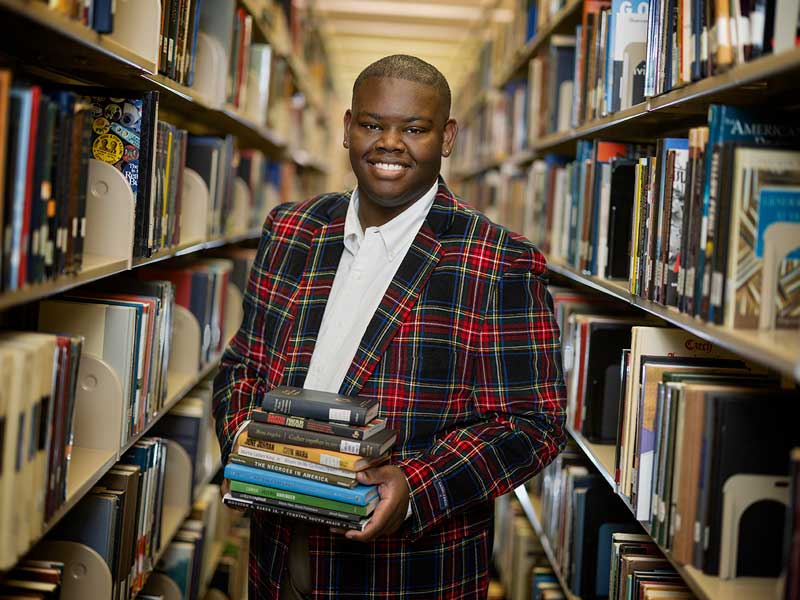 Jalon Young, whose hometown is Oxford, Mississippi, is receiving a BA from the School of Liberal Arts at Commencement 2022. After graduation, Young is returning to Oxford to enter a master’s program in Southern Studies at the University of Mississippi. (Photo by Rusty Costanza)

For the first time, the Tulane School of Liberal Arts will have a commencement poet at its diploma ceremony, which will take place on Friday, May 20, at 11 a.m., in Yulman Stadium. That poet is Jalon Young. His poem, he said, “works perfectly for graduation and starting anew.”

Young is a Bachelor of Arts candidate with majors in English and Africana Studies. By a vote of the faculty, he was selected to read the poem. He also recently had another of his poems accepted for publication in Root Work Journal.

Young’s hometown is Oxford, Mississippi, a “little literary town,” he said. He began at Tulane studying public health. But after taking a course in creative nonfiction taught by English Professor of Practice Bernice McFadden, he made a “big jump.”

“I want to continue on with my creative writing exploring themes of grief and love in times of strife and violence.”

“English had always been my heart,” said Young. “I had to have a talk with myself: ‘This is your passion.’ And that was a good decision that I made.”

Young’s short story, “Riffing,” was published in the winter 2021-2022 Tulane School of Liberal Arts magazine. The story came from an assignment in English Professor Zachary Lazar’s Advanced Fiction class in which Young enrolled in spring 2021 — his first in-person semester back on campus after a pandemic year of virtual classes.

“I wrote that story during the height of the pandemic,” said Young. “I had lost my great-aunt and my great-great-uncle.”

“Riffing” is about two waitresses and set in Mississippi in the late 1960s/early 1970s. The poignant story addresses issues of grief and love. “The idea of starting at the point of loss was heavy on my mind,” said Young. “During that time period when I was writing it — especially for Black people — you saw love at its highest form when you were pushed at the limit.”

After graduation, Young will move back to Oxford to enter a two-year master’s program in Southern Studies at the University of Mississippi. He may later pursue a Master of Fine Arts. “I want to continue on with my creative writing exploring themes of grief and love in times of strife and violence.”

Young said that he’s enjoyed the Tulane English department classes and professors. In addition to Lazar and McFadden, he credits Karisma Price and Selamawit Terrefe as being fundamental to his educational journey. “This has been a beautiful experience. I’m going to miss it, but I’m excited about this new journey. I feel like Tulane has prepared me for it.”

When he looks back at who he was when he started at Tulane, Young said, “The person that I came in freshman year is completely different than right now. Tulane has helped me mature. I’m grateful for that.”

Marvelous Mortarboards, Class of 2022 edition
Graduate learns to ‘keep going’ for herself and others
Architecture student builds a future with leadership experience
From security guard to doctor, Class of 2022 student speaker proves that ‘anything is possible’
Graduate student gets last laugh with master’s degree from Tulane