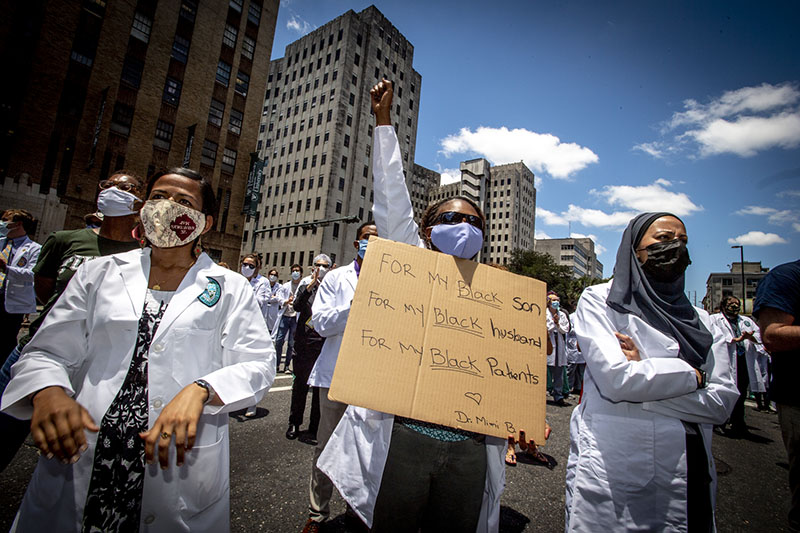 On Thursday, hundreds of Tulane School of Medicine and LSU School of Medicine faculty,  researchers and students, as well as essential personnel from nearby hospitals, united in a peaceful protest against police brutality and racism.

They gathered on Tulane Avenue to listen to powerful experiences with racism and to observe a moment of silence for all African Americans who have experienced racially motivated injustices.

Third-year Tulane medical student Manuela Gaviria helped organize the protest along with some of her fellow students. Gaviria said her fiance’s family has been affected by police brutality, so the topic touches her personally.

Gaviria said she wanted to send a “strong and impactful message” that orchestrated the support of many healthcare professionals, not just from physicians.

Third-year Tulane medical student Russell J. Ledet, PhD, spoke to the assembled crowd about being perceived by his race before anything else.

Watch the video from the peaceful protest here.

Third-year Tulane medical student Yemi Olubowale said in a separate interview that racism cuts across identities: Olubowale detailed a racist encounter when a patient treated him with marked contempt — and immediately changed her tone upon realizing he was going to be the one assisting with her care.

“I am a human first,” he said. “I love what I get to do, I love that I get to help, but I do not want to  live in a world where my black peers and I are only listened to because of our white coats. We are humans first.”

School of Medicine Associate Dean for Admissions and Student Affairs Elma I. LeDoux, MD, wrote to the faculty earlier in June: “Our medical students here at Tulane have been distressed and saddened by the continued racism and human rights violations occurring in our nation. They believe that the responsibility that comes with their white coats should include social responsibility and activism against injustice. We strongly support them in their call for racial equality and join them today as we demonstrate solidarity in this mission.”

“This whole protest is about the intersection of our identities; nothing exists in a vacuum,” Olubowale said. “Our identities can be still used as a weapon against us. That is what this is about: Stop weaponizing who we are.” 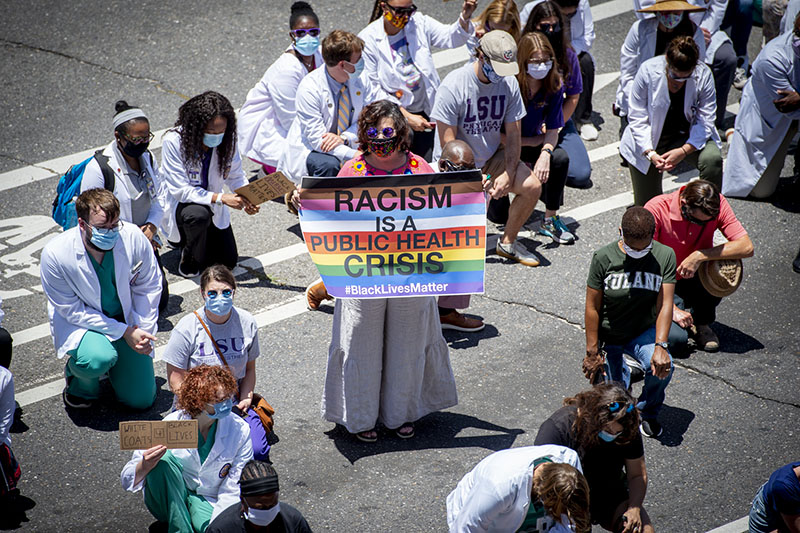 During the peaceful protest staged by Tulane School of Medicine, many participants brought signs in a show of support for black lives affected by racism. Photo by Paula Burch-Celentano.