Since the late 19th century, science and religion increasingly have come to be viewed as offering distinct and mutually exclusive views of the world. On Wednesday (Feb. 4), Dr. Francis Collins, a man who has lived and worked with a foot firmly in each camp, spoke to a packed McAlister auditorium, attempting to dispel the idea that science is inherently at odds with the notion of God. 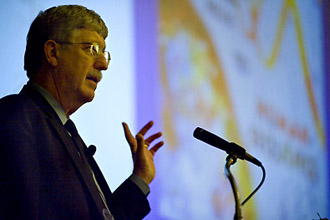 Dispelling the idea that science is at odds with belief in God, Dr. Francis Collins thinks the two views are “wonderfully complementary.” The geneticist spoke at McAlister Auditorium on Wednesday (Feb. 4). (Photos by Paula Burch-Celentano)

“These two views are not only complementary, they are wonderfully complementary,” said Collins, the former director of the Human Genome Project and author of The Language of GodA Scientist Presents Evidence for Belief, in his opening remarks. “We hear voices coming from the extreme positions saying that these two world views can't coexist; I'm here to say they can and they should.”

Collins spoke about his own path, both in science and later as a person of faith. In his pursuit of science  first by earning a graduate degree in physical chemistry, then later by studying to become a medical doctor  he “slipped into atheism.”

“As I immersed myself more deeply in the study of how atoms and molecules were put together â¦ I concluded there was nothing worth counting on other than the principles of physics and chemistry,” Collins said.

He said he started assessing his lack of faith after being challenged by a patient, who asked him, “What do you believe, doctor?”

After finding his faith, Collins continued his career in science convinced that “faith and reason were compatible.” He joked that people have asked if being a believer and a geneticist were enough to make his head explode, as if to suggest that he would have to choose one or the other.

He recounted his own journey, and attempted to answer the question that is central to his book and the lecture: “How can you defend evolution and claim to be a believer?” 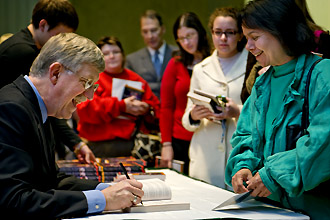 Eager readers line up to have Dr. Francis Collins sign copies of his book, The Language of GodA Scientist Presents Evidence for Belief.

“The evidence for evolution, including ourselves as humans as a part of that, is incredibly strong,” Collins said.

He said that as we approach Darwin's 200th birthday, evidence still points “very strongly” to his theories being correct. He says the Human Genome Project, which mapped the sequence of human DNA, gives us the opportunity to compare our DNA to other species. This comparison produces an evolutionary tree, which Collins argues points to a common ancestor.

“The details of studying the genome with comparison to other species bring us incontrovertibly to the conclusion that we all are part of this tapestry of evolution, we are all related, and we are descended from this common ancestor as Darwin proposed 150 years ago.”

“God's plan included the mechanism of evolution, “ Collins said. “It's all intentional, to create this marvelous diversity of living things on our planet.”

He addressed some of the common objections he hears from the religious, especially the argument that evolution is in direct conflict with the Bible. He argued that a literal interpretation of the Bible in the face of scientific evidence about the age of the universe creates unnecessary turmoil for the pious.

“There are two creation stories that don't quite agree with each other,” Collins said. “I think that was supposed to be a clue that we should not insist on absolute literalness.”

He closed his lecture with a statement that summarized his beliefs and voiced his hope for the future.

“I can find God in the laboratory or I can find God in the cathedral,” Collins said. “I hope that in a couple of years the great mass of people that find joy in the harmony between science and faith can be heard. You don't have to make a choice between these worldviews.”