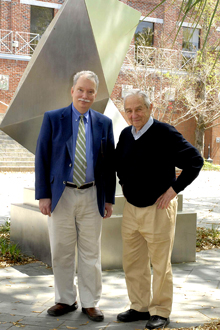 “We are delighted and honored to be chosen by Dr. Silverman to house his archives,” says Leon Miller, head of the manuscripts department of the Howard-Tilton Memorial Library. “The Silverman Papers complement the manuscripts department's extensive archival holdings documenting the artistic life of the New Orleans region. They will be an invaluable resource for studying a wide range of areas, from art history to business to city planning and corporate giving.”

Born in New York City in 1923, Silverman attended Tulane University for his undergraduate (1944) and his medical degrees (1947). He practiced urology for 30 years before shifting paths to become a sculptor. Silverman, now 86 years old, still goes to his studio, appropriately named “Art's Art Studio,” and draws seven days a week.

Silverman is most noted for his monumental metal sculptures. His powerful and often sizeable work is based on a simple idea  the use of one geometric element in repetition: the tetrahedron, a three-dimensional solid defined by four equilateral triangles.

Silverman has executed more than 400 metal sculptures that range from just inches to more than 60 feet in height. In the New Orleans area alone, more than 30 public buildings feature his artwork, including the Tulane Law School and the A. B. Freeman School of Business at Tulane, the Entergy Centre on Poydras, East Jefferson Hospital in Metairie, and Temple Sinai on St. Charles Avenue.

Across the United States, Silverman is represented in five national museums. His work also can be found in corporate collections such as Landmark Systems Corp., Washington D.C.; Smart Corp. in Atlanta; Bay Colony Development Corp. in Waltham, Mass.; and Malone &amp; Hyde, Memphis, Tenn., as well as important private collections such as the Frederick R. Weisman Foundation, Los Angeles, and the Fisher Family Collection, San Francisco. National and international publications have featured Silverman's work for its technical and aesthetic achievement.

Silverman's work is now on exhibit at Soren Christensen Gallery in New Orleans. The show, entitled “45 Years of Art,” features the most recent 25 pieces of original artwork by Silverman, including nine works never before made available to the public. This will be his final public exhibition.

In addition, the New Orleans Museum of Art honored Silverman on Wednesday (April 8) with a panel discussion reflecting on his 45-year career.