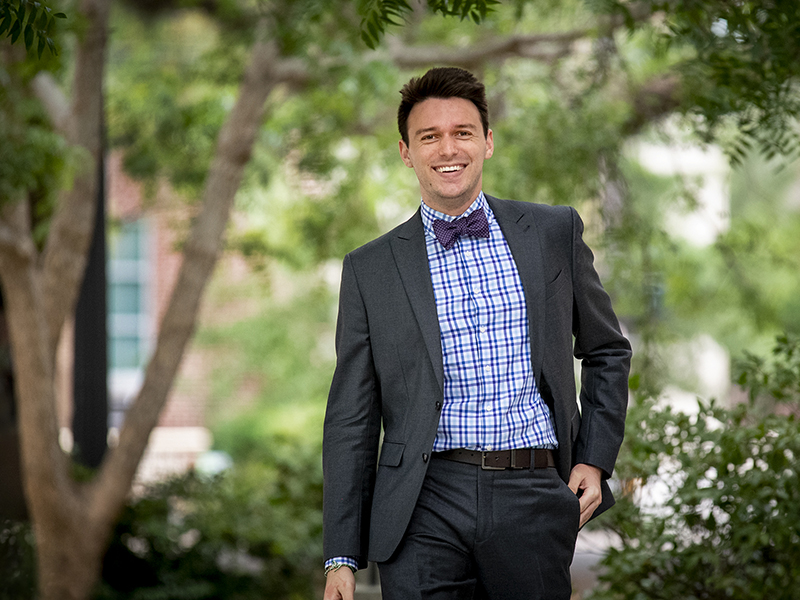 Dylan Lucia, graduating from the School of Science and Engineering with a master's degree this year, received a second chance to apply for the role of student Commencement speaker. (Photo by Paula Burch-Celentano)

Dylan Lucia is one of the student Commencement speakers for 2021. His speech will be part of the Unified Commencement Ceremony on Saturday, May 22.

Last year, Dylan Lucia was preparing to graduate from the School of Science and Engineering (SSE) with a bachelor’s degree when the pandemic began. He had been thinking about applying for the student Commencement speaker, a dream he’d harbored for years, but instead Tulane students were sent home early, before the semester ended and no traditional Commencement ceremony was held.

A year later, Lucia is graduating from SSE again, this time with a master’s degree in biomedical engineering. Lucia will now realize his dream of addressing his fellow graduates at Commencement 2021 with a speech about how the college experience helped him push past the boundaries of his fear. As a high school student, he discovered Tulane was the right fit for him, but it was an unexpected and thrilling realization for him.

In fact, staying one extra year to complete the master’s degree during the pandemic also required a leap of faith.

Citing three and a half “normal” years at Tulane, Lucia said the past academic year was “a really dynamic and different Tulane year. … You don’t know what’s around the next corner.”

Lucia has worked as a Resident Advisor and a Senior Desk Services Coordinator, as a Teaching Assistant or lab instructor for six semesters, and as a Maker Ninja. He volunteered for Tulane University Campus Programming and Tower & Crescent, among other student organizations.

He credited his fellow students with rising to challenges this academic year.

“I’m really proud of everyone who has taken this school year so seriously, and I’m really glad to see how many people were so focused on being one city for public health, and also continuing to push through their studies amidst a pandemic,” he said.

After Commencement, the San Diego–area native plans to return to California to spend time with family and pursue employment in a biotechnology or medical devices field.