Sam Honeck, the Green Wave's senior first baseman, sits in the dugout before practice, looking out on the empty Greer Field at Turchin Stadium. With Friday night's (Feb. 20) season-opening game just three days away, Honeck says calmly, “We're going to be a very good team this year. We'll surprise a lot of people.” 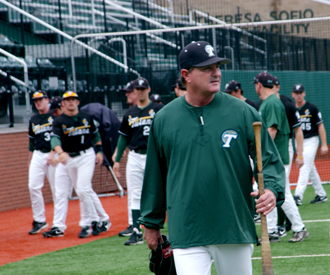 In his 16th season at Tulane, head baseball coach Rick Jones has his largest-ever class of senior players. (Photo by Angelica Johnson)

As head baseball coach Rick Jones prepares his team to face LeMoyne College on Friday at 6 p.m. in the first of four weekend games, he says up front that his seniors, all 10 of them  the largest group of seniors in his 15 years at Tulane  are among the keys to a successful season.

“I have more history with these guys,” Jones says. “If we get in a pinch, these guys have been there before.” Still, he knows they need to have “senior-type years” to take the Green Wave to the top.

At the top, of course, is the postseason NCAA Tournament. Last June, Tulane was there, winning two games in the NCAA Regional before Florida State University ended the Green Wave's season at 39-22-1.

With its strong history under Jones' leadership  11 trips to the regionals in 15 seasons, three regional championships and trips to the College World Series in 2001 and 2005  Tulane keeps its faithful baseball fans hoping for more.

“We've been pretty consistent,” Jones admits. “But it's not easy to do. You've got to have the right kind of kids. Bright kids, unselfish kids, tough kids. Especially tough kids. We've had more of those than most, but you play to find out.”

Playing to find out will be tougher than ever. Of the nine schools in Conference USA, five made it to the NCAA Tournament last year. The Green Wave also plays six games against top-notch West Coast schools, in addition to the hot in-state rivalry against Louisiana State University. 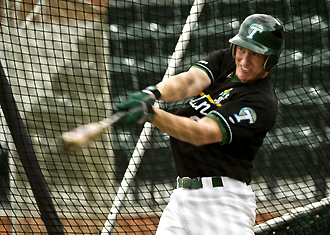 Despite the loss of pitching ace Shooter Hunt, gone to the pros as a first-round draft choice, Jones returns “everybody else” on last year's pitching staff, with two notable additions  sophomore transfer Conrad Flynn from Midland, Texas, and freshman Ryan Doiron from Lake Charles, La., both highly acclaimed.

That adds up to depth and experience in pitching, which will be crucial for the 55-game season.

First-baseman Honeck, who is an applied math major from Austin, Texas, is ready to make a difference. His goal? “To be the best I can be. To leave it all on the field.”

The field  Greer Field, starting its second season after being rebuilt, post-Hurricane Katrina  remains a favorite with players and coaches alike. With a new stadium to enjoy and their favorite team to cheer on, Tulane fans turned out strong last year.

The Green Wave notched the 10th highest attendance in NCAA Division I last year. In 39 home games, 140,402 fans passed through the gates, averaging 3,600 per game.

Senior catcher Jared Dyer urges fans to fill the stadium again this season. “We thrive off their enthusiasm,” Dyer says.

With the afternoon's practice about to begin for Dyer, Honeck and the rest of the guys, they head to the field as the preseason winds down. As Jones says, “It's my favorite time of year. Everybody's tied for first.”