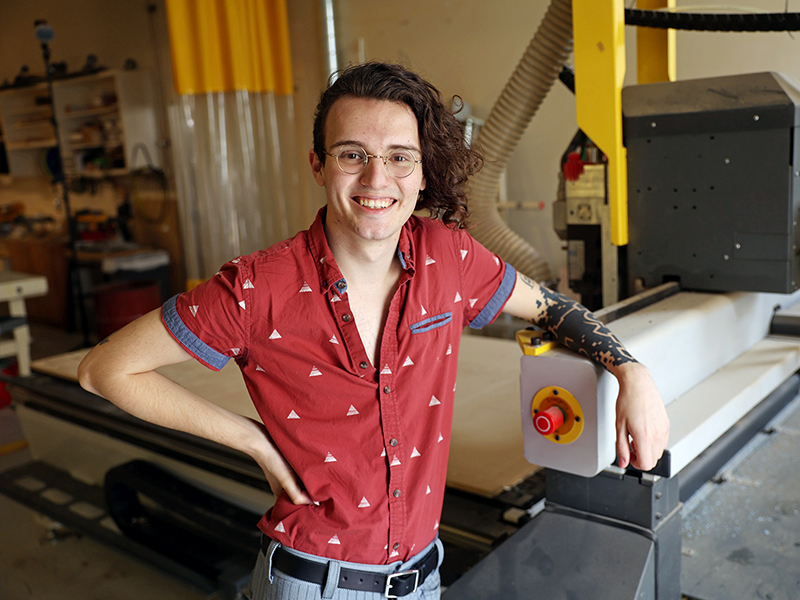 Jesse Toohey, who graduates in May with a Bachelor of Science in Architecture, assisted in the reassessment of the school’s Fabrication Labs to accommodate student work and new projects during the pandemic. Toohey also helped create a virtual, interactive exhibition space to display graduating students’ thesis projects in 2020. (Photo by Rusty Constanza)

Ask anyone at Tulane School of Architecture and they will tell you how creative and thoughtful Jesse Toohey is as a designer and fabrication specialist. But Toohey, who graduates in May with a Bachelor of Science in Architecture, gets inspiration from helping others learn how to create and then seeing that work come to life.

“In studios and around the school, I never felt an intense competition, but rather collaborative energy,” Toohey said. “We all pushed ourselves and each other to produce the most – and best – that we could.”

As a longtime student worker for the school’s Fabrication Labs, Toohey’s passion and dedication for helping others became even clearer in 2020 during the COVID-19 pandemic. The labs include multiple fabrication tools and machines, such as 3D printing, laser-cutting, CNC milling, robotics, and large-scale printing. Toohey went above and beyond to help the labs operate and explore new opportunities when the school transitioned to remote learning in Spring 2020.

During that time, Toohey helped reassess processes around all of the Fabrication Labs to accommodate the changing landscape of education and helped find additional work for student team members to take care of, despite the reduced demand for the labs, and helped implement new projects for commercial clients.

“With the pandemic, we needed to come up with an alternate solution,” said Nick LiCausi, the school’s full-time digital fabrication manager. “Jesse and I researched how we could use Unity, a video game engine, to place students inside a virtual replication of our lecture hall. It was our first time using this software, but Jesse stepped up and figured it out.”

That virtual exhibition a year ago laid the groundwork for a second, more interactive exhibition for new thesis projects this month – something that Toohey says is extremely rewarding.

“This work is outside of the usual production of TuSA and the Fabrication Labs,” Toohey said. “I’ve enjoyed exploring this option for presenting work, and I hope that future students have opportunities to expand beyond the standard drawing and rendering of architecture school.”

Toohey first began working at Tulane School of Architecture in 2017, helping to operate the school’s CNC milling machine, called the Millhaus, which is part of the Fabrication Labs. Later, Toohey became the Millhaus Lab Manager and trained all students on safe use of the large milling machine.

LiCausi praised Toohey’s “unparalleled dedication” and “extremely positive impact” in the lab and on the architecture school at large. “Since starting at Tulane, Jesse has been indispensable in the operations of Millhaus and the Fabrication Labs,” LiCausi added.