Shakespeare Fest Looks at Battle of the Sexes

For its 15th season of professional theater, the Shakespeare Festival at Tulane presents a colorful trio of comedies that explore the battle of the sexes. 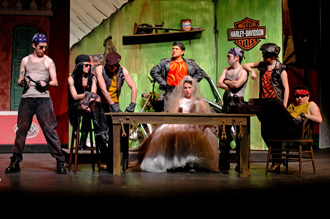 Director Ron Gural sets the Shakespeare Festival at Tulane's production of Taming of the Shrew in the New Orleans Italian-American community of the 1950s. (Photo by Brad Robbert)

The summer season begins with The Taming of the Shrew (May 29â“June 14). Set to the music of Louis Prima, Shrew is a celebration of life, love and all things Italian-American in 1950s New Orleans.

Following a record-setting preview in January, the comedy returns, featuring Lorenzo Gonzalez and Rebecca Frank reprising their roles as Petrucchio and Kate. After two nights of previews, the show officially opens on May 31 with a post-show gala celebration.

Next the festival stages As You Like It (June 26â“July 12), in which Rosalind must become a man to make a man of Orlando.

The Shakespeare Festival's high school training program, All Things Shakespeare!, presents Twelfth Night (July 23â“July 26). A rollicking comedy with a shipwreck, lost loves and gender confusion, Twelfth Night presents a world where everyone desires the person who doesn't desire them.

This year, the Shakespeare Festival continues its crowd-pleasing Lagniappe stage presentations with two new offerings. Mad Wenches and Wondrous Forward Women (June 4â“July 16), a series of new plays by female playwrights that explore the world of Shakespeare and the age of Elizabeth I, will be presented as readings.

What, Has This Thing Appeared Again Tonight? (July 25â“Aug. 2) is a play conceived, written and directed by the festival's associate artistic director, Jim Fitzmorris. In the aftermath of Hurricane Katrina, the NOLA Project Theatre Company, in a joint production with the Shakespeare Festival, returns to New Orleans in search of artistic inspiration born of disaster to answer the question, will they discover who, or what, “The Thing” is before it's too late?

For more information or to make reservations, contact the Shakespeare Festival box office at 504-865-5105, extension 2.