To avoid cancer, don't smoke, don't sunbathe, and don't work the night shift? When the World Health Organization added nightshift work to its list of probable cancer-causing agents last month, Steven Hill at the Tulane School of Medicine wasn't surprised. His laboratory has explored the connection between cancer and exposure to light since the early 1980s. 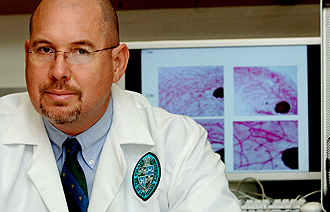 Cancer research Steven Hill has studied the effects of light and darkness on cancer risk for decades. (Photo by Paula Burch-Celentano)

Hill, chair of Tulane's Structural and Cellular Biology Department, examines the anti-tumor activities of the hormone melatonin, which is produced by the body in response to darkness.

In the early 1980s, Hill as a graduate student was the first to demonstrate that melatonin inhibits the growth of human breast cancer cells.

Hill arrived at Tulane in 1989 and was one of only a handful of investigators in the world exploring what at that time was considered the "fringe science" of melatonin and cancer.

"We were definitely swimming upstream back then," says Hill. A member of the Tulane Cancer Center, Hill holds the Lily and Edmond Safra Chair for Breast Cancer Research. He received his first grant from the National Institutes of Health in 1990 and has enjoyed continuous NIH funding since.

Numerous studies, including those conducted by Hill and his collaborators, have shown that when melatonin production shuts down, tumor development and growth is greatly enhanced.

"Melatonin production is related to a diurnal/circadian rhythm stimulated by the onset of darkness," Hill says. "It is suppressed in response to light."

Before the widespread availability of electricity, most people worked during the daylight hours and rested at night. However, with the availability of artificial lighting, most of us experience extended days, being exposed to light for 14 to 18 hours a day. These artificial photo-environments repress our normal production of melatonin.

"Even brief exposure to light during the normal dark/sleep cycle can completely block melatonin production, denying the body the benefits of melatonin's anti-tumor properties," Hill says.

According to Hill, scientific data show that women who work at night for an extended period of time have a significantly increased risk for breast cancer and an increased risk of endometrial cancer. Men who work night shifts have a higher risk of prostate cancer.

The problem is that nightshift workers don't generally achieve total reversal of their sleep patterns during their time on a given shift, Hill explains. Because their families follow a more normal wake/sleep cycle, shift workers revert to a typical social schedule on their days off. As a result, their circadian rhythms do not entrain to their shift work, and their melatonin production is diminished, leaving them at higher risk for some cancers.

Melanie Cross is public relations and marketing coordinator at the Tulane Cancer Center.