Students measuring the loss of sand on the barrier island of Grand Isle, La., are seeing coastal erosion happen before their eyes. Dean Moosavi takes students in his physical geology course to the spit of land on the edge of the Gulf of Mexico where they are observing rapid land loss in southern Louisiana. 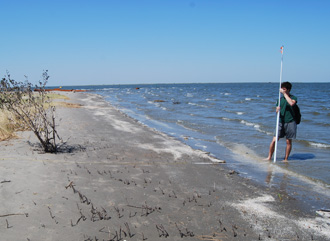 Grand Isle is an example of deteriorating barrier islands that have served in the past as part of a natural storm surge protection system for coastal Louisiana.

“We knew the island is incredibly vulnerable,” says Moosavi, a professor of practice in the Department of Earth and Environmental Sciences. “But we didn't realize how rapidly the erosion was occurring, how quickly the island is disappearing.”

This semester's class is measuring the beach after the storm surges of Hurricanes Gustav and Ike hit the island to determine the new erosion rate and to compare it to pre-storm measurements. They found that the island had been breached in two places, with erosion extending through the beach into the forest.

“Less than half of the island was left in this area,” Moosavi says. “Storms come and go, but rarely do you have data before and after.”

Moosavi's students began in spring semester 2008 to measure the height of the beach relative to sea level, transecting the eastern end of Grand Isle every 50 meters. Collaborating with Grand Isle State Park and the New Orleans Geological Society, the students in the course that fulfills part of the public-service graduation requirement have gathered baseline data for the eastern two miles of the island. 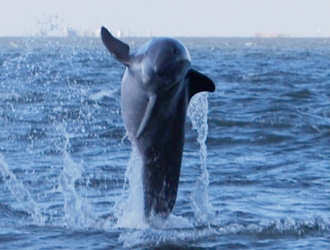 A dolphin greets students who have come to Grand Isle State Park as part of a physical geology course at Tulane.

The Tulane students conducted follow-up measurements five weeks after their baseline measurements to determine the rate of erosion. Moosavi says he expected the students' data to show the loss of beach sand over time. But both he and the students were “shocked” by the dramatic changes they observed.

“For many of these students, this is their one lab science class, and they're collecting data to help protect a public space,” says Moosavi. “It's a taste of science that's meaningful for them.”

Measurements of this type have not been made on Grand Isle before, which makes the effort particularly valuable as the U.S. Army Corps of Engineers attempts to build up the sand dunes on the island. The Corps' attempt during the summer of 2008 to restore the dunes for the first time in 30 years proved insufficient for storm surges from Gustav and Ike, according to Moosavi.

Moosavi hopes that his students gain an appreciation of the fragility of the Louisiana coastal region. He also teaches them that other coastal regions are vulnerable. The world's physical and ecological system is dependent upon land-use decisions made by humans, and his students learn what steps individuals can take to combat environmental threats.

Eventually, Moosavi anticipates having data to present to the community, which will help inform decisions about how the island's dune system can be restored. In the meantime, the School of Science and Engineering is seeing an increase in students wanting to major in earth and environmental sciences.

“Most people won't become geologists, and there never will be enough geologists to monitor everything that needs to be monitored,” Moosavi says. “What we need is more 'citizen scientists' to raise red flags.”