The courtyard outside the small clinic near Cintalapa, Mexico, is always full when news spreads that doctors are in town. It was no different when Tulane eye surgeon Dr. Delmar Caldwell and three other doctors from New Orleans flew to the poverty-stricken area for a three-day medical mission to restore sight to the functionally blind. 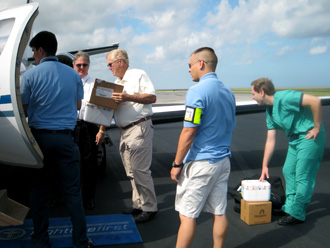 Members of the Tulane University medical team load their precious cargo of corneas for transplants as they prepare to fly to southern Mexico for a medical mission to treat eye diseases. (Photos by Susan Sarver)

Caldwell has organized medical mission trips to Cintalapa and two other small towns in southern Mexico for more than 20 years to help patients suffering from eye disease. The small clinic in Cintalapa is run by Mexico-based Good News Friends, a nonprofit that works with doctors who donate their time and expertise to help indigent patients.

“Some people walk for two or three hours to catch a bus to ride another five hours to get to this clinic,” says Caldwell, professor and chair of the Tulane Department of Ophthalmology.

The vast majority needs cataract removal. Cataract is clouding of the lens of the eye, preventing the passage of light. Most cataracts are related to aging, but young children can develop the condition due to injuries, inflammation or other eye diseases. Doctors remove the cataract and implant an artificial intraocular lens, typically restoring sight when bandages are removed the next day. 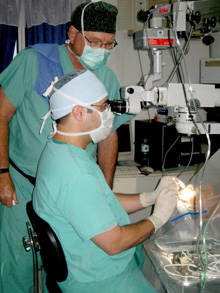 “These are people who are being led around blind. They can't even see their hands in front their faces,” Caldwell says. “After the cataract removal when they go home, they are ambulating by themselves, reading their Bibles and their papers.”

Stern and Caldwell performed 10 corneal transplants, which replaces the clear part of the eye in front of the iris and pupil with donor tissue.

The trip had several benefactors. Caldwell paid for lodging and expenses while medical supply companies donated equipment. Alcon Laboratories donated more than 650 pounds of supplies. Sidney Lassen, a longstanding supporter of the medical missions, donated the use of his plane and pilot support. Lassen is a 1955 graduate of the Tulane business school.

Caldwell says the rewards of such missions are many. It's a great feeling to be able to help so many people in a lasting way, but it's also an important lesson in altruism  and medicine  for his residents, Caldwell says. He and Stern spent more than an hour and a half walking residents through cataract surgeries at the beginning of the mission.

“When we finished, they were doing cases all by themselves in 20 to 30 minutes. So it's a tremendous educational experience for them.”

Caldwell hopes to continue with future relief missions to Mexico next year. Unfortunately, the number of patients needing treatment continues to grow.

“The sad thing is that you go there and you do the surgeries â¦ when you shut down, there is still a courtyard full of people there wanting to be seen,” he says.