As a symbol, it is simple. In a photograph seen around the world, the handwritten sign  “PLEAS HELP”  held by people on a roof waiting for rescue from the Hurricane Katrina floodwaters signified desperation and anguish. But there's more to the story, said poet Nikky Finney. 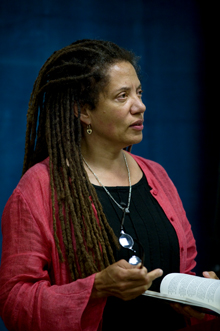 At the Transatlantic Slave Trade Education Project event at Tulane on Wednesday (June 25), Nikky Finney, a poet and professor of English at the University of Kentucky, reads from her poetry. (Photos by Paula Burch-Celentano)

At the Transatlantic Slave Trade Education Project public event on the Tulane uptown campus on Wednesday (June 25), Finney spoke of the powerful sign, describing what happened to that “E” in “please.”

Reading a long poem about the hurricane, Finney enthralled the audience of 100 in the Chadwick Auditorium of Goldring/Woldenberg Hall with imagery of the people who are “dark but not broken,” in New Orleans, a city of “non-swimmers and poor spellers.”

Although the United States and Great Britain had declared international slave trading illegal by 1808, more than 40,000 African slaves entered the United States illegally during the next half-century. And the domestic slave market in New Orleans boomed until Emancipation in 1865.

Historian Sylviane Diouf, director of the Schomburg-Mellon Humanities Institute and author of Dreams of Africa in Alabama: The Slave Ship Clotilda and the Story of the Last Africans Brought to America, told the story of Africans who were brought to Mobile, Ala., on the last slave ship to enter the United States in 1860  52 years after the importation of African slaves had been banned by the U.S. Congress.

In the end, the story of the Africans who arrived in America on the Clotilda is a story of triumph, said Diouf. They eventually became landowners and maintained strong community and family ties. “They kept their unity, pride and dignity,” said Diouf. 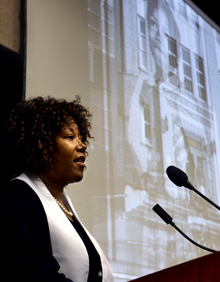 Ruby Bridges received a special award from Tulane for her courage in helping desegregate an elementary school in New Orleans.

A special guest and speaker at the event was Ruby Bridges, who as a 6-year-old in 1960 was the one of the first African Americans to desegregate a school in the United States. Bridges bravely attended the formerly all-white William Frantz Elementary School in New Orleans.

Escorted by federal marshals, Bridges walked a gauntlet of jeering white parents for months to get to her classroom, where she was the lone student, taught by a white teacher, Barbara Henry.

For an entire year, Bridges was the only student in the school because the white parents had withdrawn their children from the school.

George Bernstein, Tulane history professor and interim dean of the School of Liberal Arts, presented a special award from Tulane University to Bridges in recognition of her courage and contributions to racial understanding and reconciliation.

The public event was part of the Teaching the Slave Trade summer institute, held all week in New Orleans and on the Tulane campus.

Dozens of teachers from Alabama, Connecticut, Florida, Illinois, Mississippi, Ohio, Pennsylvania, Norway and England, as well as Louisiana, joined scholars and artists to remember slavery and its legacy, a legacy that includes discrimination, violence, poverty, illiteracy  and amazing tales of survival.