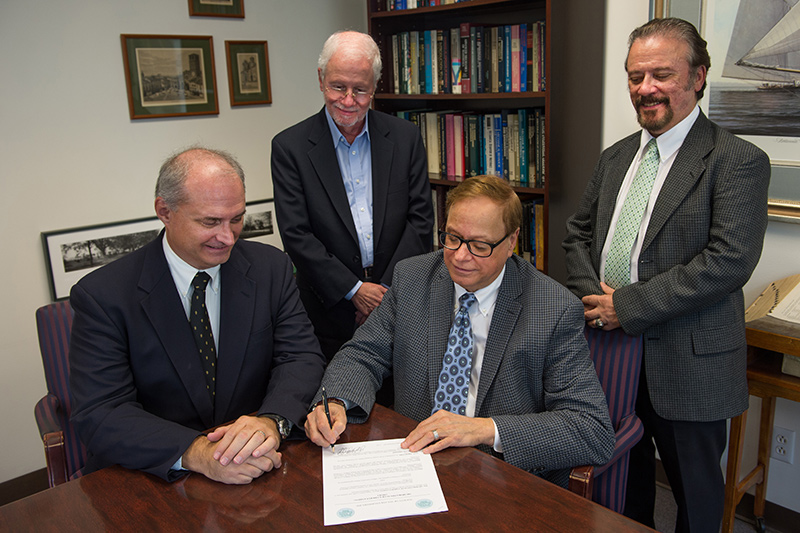 Society of Tulane Engineers (STE) president David Gereighty (left) and Tulane vice president of alumni relations James Stofan (seated) sign a memorandum of understanding as Nicholas Altiero, former dean of the School of Science and Engineering, and STE vice president Nicholas Musmeci look on. The document designated STE as a special interest group that will benefit from the services of the Office of Alumni Relations. (Photo by Sally Asher)

The alumni group the Society of Tulane Engineers (STE) strives to create new ties between Tulane graduates and the School of Science and Engineering (SSE).

“They want to re-engage the alumni — connecting them back to the university,” said James Stofan, vice president of alumni relations.

Founded in 1951 by civil engineering student Murdock M. Snelling Jr., STE was originally active as part of the former School of Engineering. The group reorganized in 2008 to foster the initiatives of the newly established SSE.

“They want to re-engage the alumni — connecting them back to the university.”

A 1983 graduate of the School of Engineering, Gereighty has been involved with the alumni organization for nearly 30 years.

“An overwhelming majority of the alumni are people who graduated from departments that no longer exist at Tulane. We’re trying to reach out to them and bring them together,” he said.

In September 2016, representatives from the SSE, STE and the Tulane Alumni Association gathered to sign a memorandum of understanding that designated STE as a special interest group that will benefit from the services of the Office of Alumni Relations.

The organization coordinates activities that are open to the Tulane community, like hosting a tailgating tent during this year’s Homecoming football game, but members also work to establish student internships and alumni mentorships.

“Our main focus is to be a voice for the alumni of the university,” said Gereighty.

Like this article? Keep reading: Capital One lends support to girls’ STEM workshop at Tulane