Soft Sells in a Tough Economy

In a tough economy, advertisers try using empathy and escapism to sell products and services, says Mita Sujan, a professor of marketing and consumer behavior at the Tulane A. B. Freeman School of Business. During the current economic crisis, companies also are using another tactic called uncertainty reduction, which gives customers added guarantees when they make purchases. 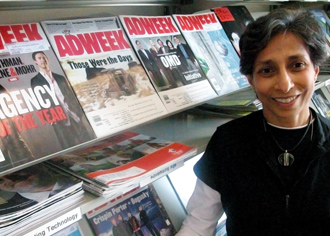 Mita Sujan, whose teaching and research interests include consumer behavior, branding and advertising, holds the Malcolm S. Woldenberg Chair in the Freeman School of Business. (Photo by Alicia Duplessis)

As an example of an uncertainty-reduction marketing ploy, Sujan points to the Hyundai automobile company's offer to take back cars sold this year if car buyers lose their jobs after they make their purchase. Hyundai is selling comfort and peace of mind to consumers during the recession, says Sujan.

Companies are racing to show consumers that they can offer better products and more service at less cost than their competitors. And in the tough economy, advertising has not slowed down.

Advertisers are presenting consumers with “a way out of their troubles,” if only for a moment. An increase in moviegoing is an indication that people are turning to small indulgences during the economic downturn, Sujan says.

“People want to escape the hard times,” she adds.

Companies also want to convey the message: “We understand what you're going through.”

During an economic recession, consumer behavior tends to follow a specific pattern in which moderate- to low-income consumers trade down and pinch their pennies while high-end spenders actually spend more extravagantly, says Sujan.

Because middle-income consumers are trading down, stores such as Wal-Mart are doing well during the recession. “People who shop at Whole Foods may start going to Sam's Club,” says Sujan.

Wealthier consumers, on the other hand, who feel that their money isn't worth much in the bank, might prefer to splurge on luxury items such as yachts and luxury cars.

“Because they are investment savvy, they realize that a Rolls Royce might hold its value better than their stock that could go down every day and cause them to lose money,” Sujan says.

She holds the Malcolm S. Woldenberg Chair in the Freeman School of Business. Her teaching and research interests include consumer behavior, branding, advertising and promotion and consumer decision-making.