Can an old drug perform new wonders? That's what a team of researchers at Tulane and Harvard universities is trying to find out. They have partnered with the National Institutes of Health to test the abilities of salsalate, an inexpensive generic drug, to control diabetes. 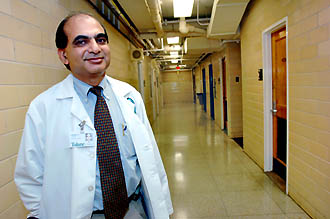 “In 1876 a German doctor was treating patients for arthritis with salsalate, an aspirin-like drug,” says Dr. Vivian Fonseca, professor of medicine who holds the Tullis-Tulane Alumni Chair in Diabetes at Tulane and serves as co-principal investigator of the salsalate research program. “He reported in a German medical journal that the drug made his patients' diabetes better.”

But the report was filed and forgotten. Much later, in the 1950s, according to Fonseca, some doctors tried using aspirin to treat diabetes, but other drugs to control blood glucose levels in diabetics came along and that approach was sidelined.

“In the past 10 years, there has been increased interest in aspirin and its various effects, and people found that it may have an effect on diabetes,” says Fonseca. “However, the dose you have to use is just too high to use for diabetes.”

Researchers at the Joslin Diabetes Center and Harvard University then did some limited testing of salsalate, which is related chemically to aspirin and has been used for years to treat arthritis.

“At the present time, there is no cure for diabetes, so our aim is to find ways to control the disease,” says Fonseca. “There is a link between inflammation and diabetes that we don't fully understand. It appears that if you become overweight, you switch on a low-grade inflammation and that makes you susceptible to Type 2 diabetes  that's one theory. Another theory is that as a part of general ill health, you have some inflammation, perhaps from microbes in the gut or dental problems. So it's a very complex relationship that we hope to break by using the appropriate treatments to correct this underlying inflammation.”

The Joslin Clinic and Harvard wanted to do a larger trial, and in collaboration with Fonseca approached the National Institutes of Health, which funded a major clinical trial of salsalate in two parts.

“The first phase, which is completed, showed that the drug caused a reduction in glucose levels sufficient to allow us to go on to the more definite second phase of the trial,” says Fonseca.

For the second phase, Tulane, in partnership with Harvard, is moving the trial forward at 23 different study sites around the country, similar to the way pharmaceutical companies conduct multi-center trials of new drugs to get approval, according to Fonseca.

“We will treat each patient for a year with this drug and see how they do with their diabetes,” says Fonseca. “We also will monitor a whole range of safety parameters.”

Besides offering enhanced safety, says Fonseca, salsalate is generic and inexpensive, and will benefit lower income patients. In addition, because of its low cost, it will be more easily available in developing countries with rising rates of diabetes.

Dr. Jennifer John Kalarickal, assistant professor of medicine, is co-investigator at Tulane. For more information about participating in the study, call 504-988-4651.