Southern Slant on Being Jewish

What does it mean to be Jewish and Southern? A sociologist in the Jewish studies program at Tulane is especially interested in the topic of identity and religion in post-Katrina New Orleans. 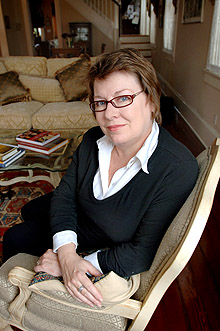 Brenda Brasher, a visiting assistant professor in sociology and Jewish studies, says preserving its identity is important to the Jewish community in New Orleans. (Photo by Paula Burch-Celentano)

Religion is an important part of each person's identity and a source of social support in our fast-changing world, according to Brenda Brasher, an assistant visiting professor of sociology and Jewish studies. She teaches about the sociology of religion; gender and religions; society, identity and technology; and the social sources of Jewish identity in the modern world.

The author of several books, Brasher has written Give Me That Online Religion, an exploration of the role of the Internet in faith, and Godly Women: Fundamentalism and Female Power, the result of a three-year study of women in Christian congregations from California to New York.

She moved to New Orleans from the University of Aberdeen in Scotland a year ago with her husband, Michael Weil, executive director of the Jewish Federation of Greater New Orleans, and shifted her field of study from European Jewish identity to Jewish identity in the South.

“This is one of the oldest Jewish communities in the United States,” Brasher says of New Orleans. She is analyzing data from the first demographic study of the New Orleans Jewish community in more than 20 years. The study was conducted to obtain data about Jews living in New Orleans after Hurricane Katrina.

“Why is it so important for Jewish New Orleanians to maintain their identity, when they could have folded up their tents and moved on?” Brasher asks.

Everywhere Jews take up residence, they blend into communities, taking on the characteristics of each place. The Jewish community in New Orleans exemplifies this trend. Early Jewish settlers who came to New Orleans adopted and adapted local customs, giving them a Jewish spin. In the process, the Jewish New Orleans tradition was born, Brasher says. The first Rex, king of Carnival in New Orleans, was Jewish. In Crescent City homes, it is not unusual to find a Passover Seder plate proudly displayed alongside an oyster plate, though many Jews consider shellfish improper. According to Brasher, the New Orleans Jewish community is unique and committed to the revival of the city.

“The Jewish community in New Orleans is wrestling with the secure recovery of the arts and culinary traditions, as well as their own identity and values as one of the flavors in the gumbo that is New Orleans,” Brasher says.