Productivity  often associated with farm crops and investment yields has its place in academia. Scholarly productivity can be tracked and quantified in terms of books and articles published. The Tulane University Department of Spanish and Portuguese, ranked second last year in its academic areas for productivity, is showing no signs of slowing down. 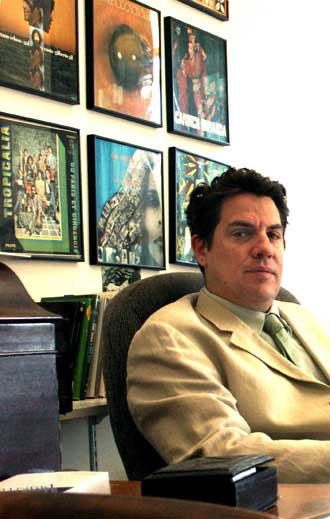 Christopher Dunn, chair of the Department of Spanish and
Portuguese, says his department excels in teaching,
research and public service. (Photo by Mark Hogan)

Christopher Dunn, associate professor and chair of Spanish and Portuguese, says that most of his colleagues are working on books and in the next few years, “we should see a stream of new books.”

In the 2007 Chronicle of Higher Education Faculty Scholarly Productivity Index, which compiles overall institutional rankings on 375 universities that offer the PhD degree, the Tulane department ranked second in the category of Spanish and Portuguese language and literature.

The rankings are based on an output index of faculty members' productivity, which continues to grow in the Tulane department.

Among the department's scholarly activities, Dunn and professor Idelber Avelar are co-editing a volume of essays, Brazilian Popular Music and Citizenship, which will feature nearly 20 essays by scholars from Brazil and the United States.

Avelar maintains a blog, “Biscoito Fino e a Massa,” dedicated to Brazilian literature, politics, popular music and soccer. He recently published an essay, “Cultural Studies in the Blogosphere,” in Reading Otherwise: The Ethics of Latin American Cultural and Literary Studies. He also won an award from the Brazilian Foreign Ministry for an essay on Brazilian writer Machado de Assis.

Jean Dangler, associate professor, has an article, “Edging Toward Iberia,” in the journal Diacritics. And she's working on a book with the same title. The University of Notre Dame Press published her book, Making Difference in Medieval and Early Modern Iberia, in 2005.

Marilyn Miller, associate professor, has a forthcoming article, “Imitation and Improvization in Juan Francisco Manzano's 'Zafira,'” in Colonial Latin American Review. She also is editing a volume Tango Lessons, a collection of essays on tango as an interdisciplinary form.

Tatjana Pavlovic, associate professor, has co-edited with a group of graduate students from the Department of Spanish and Portuguese a book titled 100 Years of Spanish Cinema, which is forthcoming from Blackwell Publishing in fall 2008.

Dunn adds that the rankings “are part of the larger story of the strength of this department, which also excels in teaching and has taken a leading role in public-service initiatives.”