The edges are frayed, the pages yellowed and bearing faint streaks where Hurricane Katrina waters left their mark. Still, these fragile but vibrant pages from pre-Civil War New Orleans are the stars of an exhibition honoring 200 years of Spanish language publishing in the Crescent City. 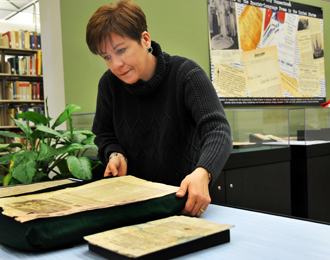 Pre-Civil War newspapers that are part of an exhibit marking the bicentennial of Spanish language publishing in New Orleans get careful handling by Hortensia Calvo, Doris Stone Director of the Latin American Library at Tulane. (Photos by Sally Asher)

The exhibit draws from materials archived by the Latin American Library and the Louisiana Collection at Tulane, tracing a newspaper and magazine history that is not well known, says Hortensia Calvo, the Doris Stone Director of the Latin American Library who has developed the new exhibit, “Crescent City Connections: 200 Years of the Spanish-Language Press in New Orleans.”

The exhibit opens on Friday (Dec. 5) in the Latin American Library on the fourth floor of Howard-Tilton Memorial Library, with guest speakers from 3â“5 p.m. and a reception from 5â“6 p.m.

“New Orleans has long traced its cultural roots to France,” says Calvo. “Yet, Spanish-speaking peoples from Spain and Latin America have left a lasting imprint on all aspects of the city  business and political ventures, jazz, architecture, food and print culture.”

Early evidence of that print culture can be found in the first Spanish-language newspaper in the United States, El MisisipÃ­, which was printed in New Orleans from 1808 to 1810.

“In fact, during the first half of the 19th century, the Crescent City was the undisputed center of the U.S. Hispanic press, with 23 known Spanish-language newspapers, almost double the number for New York at that time,” Calvo adds. 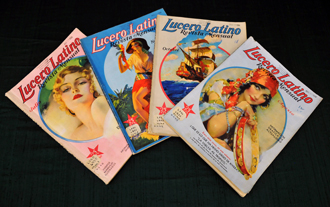 Issues of Lucero Latino from the 1930s, published in New Orleans, include a variety of articles from Hollywood news to stories on fashion, art and science.

In an exhibit display case is a carefully preserved, original 1835 issue of El MisisipÃ­ from the Louisiana Collection at Tulane, still bearing a faint streak of water damage, the result of flooding after Katrina in the Jones Hall basement where it had been stored. Its front page, still entirely legible, includes a beautiful drawing of an Indian beside the flowing Mississippi River.

The case also includes a facsimile of an 1808 issue of El MisisipÃ­, one of only four issues held in the United States. The newspaper ceased publishing in 1810 but was resurrected under the same name in the 1830s.

Other highlights of the exhibit include issues of El Mercurio (1911-1927), regarded as New Orleans' most prestigious Spanish-language publication that included articles by prominent intellectuals, and colorful 1930s issues of the popular Lucero Latino, which featured articles on Hollywood stars, fashion, art, science, international affairs and poetry by literary figures of the day.

Reflecting the growing Latin American population in mid-20th century New Orleans, local businesses such as D. H. Holmes and Maison Blanche department stores as well as schools such as Newcomb College and Sacred Heart Academy ran advertisements in the Spanish-language publications, hoping to attract wealthy Latin American consumers, tourists and students. The exhibit displays enlarged versions of some of these advertisements.

To commemorate the publishing bicentennial, two guest speakers will make presentations at Friday's event. Kirstin Silva Gruesz, professor of literature at the University of Californiaâ“Santa Cruz, will speak on “New Orleans, a Historical Center of the Spanish-Language Print World.”