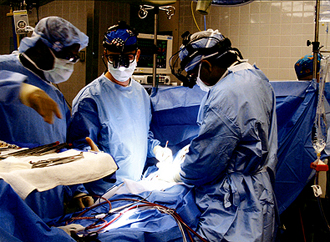 At another New Orleansâ“area hospital, Rhea Raiford had scheduled surgery for her 13-year-old son, Blaize, in May to correct his sunken chest.

But Dr. Thomas Yeh, a pediatric cardiothoracic surgeon at Tulane Medical Center, told the family that a minimally invasive option called the Nuss procedure is available at Tulane and requires only a short hospital stay.

At the end of six weeks, Blaize would be able to play his drums and resume most sports and physical activity.

Blaize was born with pectus excavatum, a chest wall deformity affecting one in every 1,000 children.

“In the past, more invasive operations were used to correct both types of chest wall defects,” says Yeh, director of the Tulane Chest Wall Center. “Those lengthy surgeries typically led to significant blood loss, blood transfusions, long and unsightly scars down the center of the chest, and, worst of all, long-term limitations on a child's physical activity,” he says. “Now we can spare most patients those problems, and still give then better outcomes while using less invasive approaches.”

Blaize was fortunate to have friends who did not tease him about the concave shape of his chest and he made a joke of it.

“He used to eat cereal and milk from his chest,” Raiford says. “Why use a bowl, mama?” he'd ask.

A year ago, Raiford noticed Blaize pressing on his chest. His malformed rib cage was getting worse as he grew, crowding his heart and lungs, often leaving him out of breath. Blaize saw Dr. Robert Hopkins, a Tulane pulmonologist, who referred him to Yeh.

A skilled pediatric heart surgeon with specialized expertise in the correction of chest wall defects, Yeh was recruited to Tulane in 2007 from Children's Medical Center in Dallas, to lead and develop Tulane's state-of-the-art Pediatric Heart Center and the Chest Wall Center. He brought years of experience with the Nuss procedure, which was developed in 1987. Yeh is professor of cardiothoracic surgery in the Tulane University School of Medicine.

The Tulane Chest Wall Center avoids using invasive surgery, preferring the Nuss procedure where a metal bar is temporarily inserted underneath the breastbone through small incisions under each arm. The operation usually takes between one to two hours. There are no stitches on the outside of the body and recovery is faster and less painful.

After Blaize underwent the Nuss procedure, he required medication for three days following surgery and then he was pain-free.

“I've had such wonderful experiences with all the doctors at Tulane,” Rhea Raiford says. “Dr. Yeh was an angel sent to me because my son didn't have to go through everything he would have had to go through [otherwise].”