Tulane senior point guard Ashley Langford is one of 12 recipients of the Conference USA Spirit of Service award that recognizes her excellence in community service and academic achievement, as well as her team leadership. 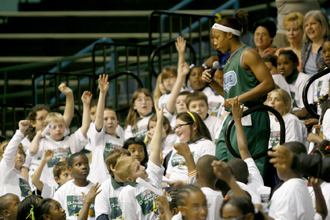 Surrounded by eager kids during a Classroom on the Court session at Avron B. Fogelman Arena in the Devlin Fieldhouse, Green Wave student-athlete Ashley Langford answers questions. She is a senior guard on the women's basketball team. (Photos by Steve Kashishian)

The Harrisburg, Pa., native, who ranks second in C-USA history in assists, has participated in a variety of community service projects. She served as the emcee of Tulane's Classroom on the Court program, leading a group of more than 800 elementary school students in lessons on geography and basketball multiple times throughout the 2008-09 season.

She also was a student-host in Tulane's Youth Impact program, which promoted football, academics and life skills to more than 100 disadvantaged boys from the Recovery School District in the New Orleans area.

In addition, Langford worked with a team that helped rebuild Johnson Elementary School's library and participated in Tulane's “Shadow a Student-Athlete Day,” which shows middle school students a day in the life of a Tulane student-athlete and promotes education and athletics as a means of personal growth.

A member of the C-USA All-Academic Team and C-USA Commissioner's Honor Roll, Langford serves as president of Tulane Student-Athlete Advisory Council while maintaining a GPA of 3.26 in a dual major of management and marketing.

On the court, Langford is Tulane's all-time assist leader. She finished in the top 30 in assists in the NCAA in each of the last four seasons, including 17th this past season. She ranks second in Tulane history in free-throw percentage.

Langford was a four-time All-Conference USA selection, including a third team honoree in 2008-09.

The C-USA Spirit of Service Award is designed to recognize the community service efforts of the league's student-athletes, based upon significant community service, good academic standing and participation in their elected sport.