Supply and demand, that delicate relationship between producers and consumers, is perhaps the central dynamic of a market economy. In an hour when all eyes are fixed on the shifting sands of the financial market, Tulane sociologist Shayne Lee has published a book that applies the economic model of supply and demand to a different kind of commerce. 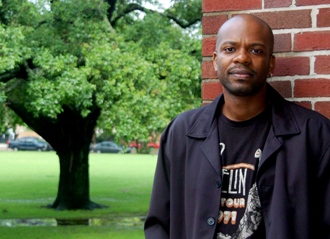 A new book by Tulane sociologist Shayne Lee examines the success of five pastors who are influential leaders in American Protestantism. (Photo by Nick Marinello)

Holy Mavericks: Evangelical Innovators and the Spiritual Marketplace examines the success of five pastors who are among the most influential contemporary leaders in American Protestantism.

“Our goal was not to provide an objective analysis of these five religious celebrities. Our goal was to explain their appeal,” says Lee, assistant professor of sociology, who co-wrote the book with historian Phillip Luke Sinitiere.

“We used the theory of religious economy to show why some religious suppliers are able to attract large followings while others are not,” says Lee, who in 2005 published T.D. Jakes: America's New Preacher, a critical examination of the most influential African American preacher on the pulpit today.

Jakes' ministry is among those analyzed in Holy Mavericks, as are the ministries of Rick Warren, the best-selling author of The Purpose Driven Life; Joel Osteen, who preaches to weekly congregations of 40,000 in an arena formerly used by the Houston Rockets; Paula White, who Lee calls the “Oprah Winfrey of the evangelical world;” and Brian McLaren, a leader in the new emergent church movement who is popular with Generation X followers.

“We feel that you could make a case that any of these five could replace Billy Graham as America's next preacher,” says Lee.

The five also exhibit a kind of entrepreneurial spirit that Lee and Sinitiere argue is at the heart of their success. Each possesses, says Lee, “the ability to understand American culture, to be on the cutting edge of using psychotherapy and aspects in the language and taste of contemporary Americans in order to draw them to their congregations.”

Through this approach to understanding religion as a competitive spiritual marketplace, Lee hopes to put to rest what he says is the misguided “strict-church thesis” employed by sociologists in the past. That thesis essentially explains the success of conservative denominations in the 20th century by suggesting that the constituencies of these faiths, which have more restrictive practices, tend to comprise more dedicated, zealous followers and thus produce more vibrant churches.

“It has nothing to do with strictness,” Lee contends. “None of these five ministries promote strict religion. It has more to do with the evangelical's ability to address existential needs and the cultural taste of a broad range of contemporary people.”

This economic dynamic is unique to the American spiritual marketplace, and dates back to the adoption of the First Amendment and the separation of church and state, says Lee. “Once religion became disassociated from the state, then the religious supplier had the need to draw in members in order to have a livelihood.”

Those who think evangelicalism is a modern phenomenon might be surprised to learn about George Whitefield, an Englishman who became America's first religious celebrity in the 18th century.

“He introduced the kind of vibrant style of preaching that resonates with the common people's style and taste and totally changed American religion,” says Lee.