Spring Season Brings All That Jazz

This spring brings a bustle of activity for jazz musicians at Tulane University. In addition to multiple performances at the famous New Orleans Jazz and Heritage Festival, campus musicians  students as well as more experienced jazzmen on the faculty  have a whole lot going on. 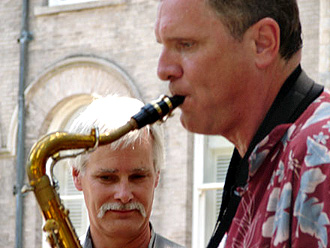 John Doheny, a professor of practice, plays sax while Jim Markway, a tutor in the Newcomb Department of Music, plays bass in the Professors of Pleasure jazz quintet. (Photo by Kathryn Hobgood)

This week, the Tulane Jazz Orchestra will be busy with several appearances. On Tuesday (April 29), the orchestra will have its end-of-semester concert at 8 p.m. in Dixon Theatre.

Smaller jazz combos will perform on Wednesday (April 30) beginning at 6 p.m. in Dixon Recital Hall. And on Friday (May 2), the orchestra will perform on the Gentilly Stage at the New Orleans Jazzfest at 11:35 a.m.

Tulane students are the musicians in the Tulane Jazz Orchestra. The orchestra is directed by John Doheny, a professor of practice in the Newcomb Department of Music, who is extra busy this season.

Doheny teaches jazz theory, history and applied private lessons, in addition to directing the student jazz ensembles. He also is a working musician.

A project that came to fruition for Doheny recently was the Tulane faculty jazz quintet's first CD.

Dubbing themselves the “Professors of Pleasure,” the quintet features Doheny on saxophone; John Dobry, a professor of practice, on guitar; Jim Markway on bass; and Kevin O'Day on drums. Jesse McBride took over the piano chair from original member Fredrick Sanders in fall 2007. Markway, O'Day and McBride are all prominent New Orleans musicians who teach private lessons at Tulane. O'Day is an adjunct instructor who teaches music business. 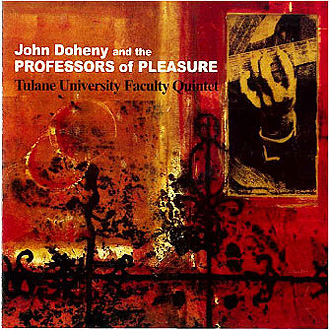 With their CD, the Professors of Pleasure were able to land a spot at the Vancouver International Jazz Festival.

The debut CD is self-titled as John Doheny and the Professors of Pleasure: Tulane University Faculty Quintet. It features eight tracks including original compositions by Dobry (“Padrino,” “Your Majesty”), Doheny (“A Greasy One”), Markway (“Halifax”), and former member Sanders (“Big G's Love”), who is the featured pianist on the disc.

The Professors of Pleasure incorporate some covers, keeping their focus on New Orleans music and composers.

Preview tracks from the CD or purchase the CD directly from the Louisiana Music Factory.

The Professors are already enjoying the fruits of their labor. With their CD, they were able to land a spot at the Vancouver International Jazz Festival on June 23, with funding assistance from the Tulane School of Liberal Arts dean's office and the music department.

“I'd like to tour us around a bit more locally in state, and work a bit more in town. All of us play around town quite a bit these days with other people, but not enough under the Professors' banner,” Doheny says.