“We are not done; it is a work in progress,” says Tim Hornback of society's movement toward acceptance and inclusiveness of its members who are not considered to be in the mainstream. Hornback, Tulane's lesbian, gay, bisexual and transgender coordinator for student life, recently received a statewide award for promoting that message of tolerance and acceptance. 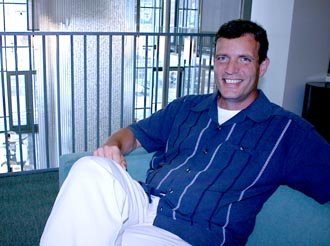 Of his work, Timothy Hornback, Tulane's lesbian, gay, bisexual and transgender coordinator for student life, says, “There is a lot to do, but not enough time.” (Photo by Tricia Travis)

He received the Equality Award from the Louisiana chapter of the Human Rights Campaign for his work as an activist in the New Orleans community.

While he works part time in the Office of Multicultural Affairs as Tulane's LGBT officer, Hornback is in full service to the community through his efforts volunteering as co-chair of the Community Coalition, an umbrella organization that promotes collaboration and educational opportunities for LGBT businesses and organizations, as well as fulfilling duties as LGBT community representative on the City of New Orleans Human Relations Commission.

He also serves on the AIDSLaw board of directors, the New Orleans chapter of Parents, Families and Friends of Lesbians and Gays Scholarship Committee and the New Orleans AIDS Memorial Commission.

In 2001, Hornback became the first administrative director for the Forum for Equality, a New Orleans-based civil rights and political advocacy group with whom he worked for seven years.

“I've always volunteered,” says Hornback. “It is something that is important for me to do.”

Hornback is equally understated in describing his role at Tulane. “I just direct people to resources,” he says. Beyond that, Hornback says his role is to coordinate programs, provide information regarding his office and to simply be available to students.

“Tulane is an open and welcoming campus,” he says. “Still, there is a need for diversity training. A need to enlighten people on the different aspects of humanity.”

Hornback says there are a lot of programs he would like to implement on campus, given the time and funding. On the top of his wish list is a project to create safe zones for minority and LGBT students. Such zones could be “a harbor in the storm” for students, says Hornback.

Hornback received the Equality Award at a May 17 gala given by the Louisiana Human Rights Campaign. The HRC is the nation's largest organization working for gay, lesbian, bisexual and transgender equality, with more than 700,000 members.