On Stage at Jazz Fest

Nick Spitzer has been in the business of asking questions for 30 years. For the next two weekends the veteran interviewer will indulge his curiosity about American music and culture at the New Orleans Jazz and Heritage Festival, where he will conduct interviews on the festival's Allison Miner Music Heritage Stage. 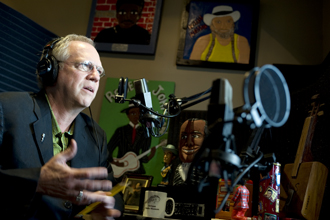 Nick Spitzer, professor of American studies and communication, is one of several members of the Tulane community who will appear on stage at the 2009 New Orleans Jazz and Heritage Festival. (Photo by Paula Burch-Celentano)

Spitzer, a professor of American studies and communication at Tulane and producer and host of the nationally syndicated radio show “American Routes,” says there is a big difference between interviews that are carefully scripted and produced for broadcast and those done live on the Jazz Fest stage. He prefers the latter.

“Live interviews are more like theater because you are not quite sure how it will go,” says Spitzer, who has interviewed musicians at the Jazz Fest since the early 1980s. “There's no going back once something is said.”

This year, Spitzer is slated to interview Booker T. Jones of Booker T. and the MGs during the first weekend of the festival and the members of Los Lobos during the festival's second weekend. The festival runs April 24â“26 and April 30â“May 3 at the New Orleans Fairgrounds.

Spitzer will be joined at the Jazz Fest by other members of the Tulane community. Among them is Karen Celestan, manager of community relations and policy in the Office of Government Affairs. Like Spitzer, Celestan will conduct an interview on the music heritage stage. Her conversation will be with members of the group Earth, Wind and Fire on Sunday (April 26).

Celestan, who has conducted Jazz Festival interviews for eight years, also will emcee two of the festival's off-site workshops, including the “Gospel is Alive” workshop held on Tulane's uptown campus and the “Roots of Rhythm” African dance workshop held at Dillard University.

“I love the music and the open air of the festival,” says Celestan about her festival experiences. “There is always a good vibe and it's just a peaceful place to be.”

John Doheny, a professor of practice and coordinator of jazz performance studies in the Newcomb Department of Music, says the festival is a great example of how studying music in New Orleans presents opportunities that are not as likely to be had elsewhere.

“There is no better place in America right now to be a young aspiring musician,” says Doheny. “You can be a jazz musician in New York all your life and never get to play at the Bottom Line or the JVC Jazz Festival, but I've got second-year students who have gotten equivalent opportunities here.”

While the Jazz Festival is a “big-stage gig,” Doheny passes on to his students the advice given to him by a mentor: “A real pro always gives 110 percent whether there is five people in the audience or 5,000.”

Click here for a partial listing of members of the Tulane community who will be on stage at Jazz Fest-related events.