The first week back to school can be a bit chaotic. If it seems any more circus-like this year, it's probably attributable to the addition of "zebras" on campus. Students, faculty and staff members walking across the Tulane uptown campus and eating in Bruff Commons today (Aug. 26) are likely to spot plastic, inflated zebras and students in zebra costumes to promote a new program against gender violence. 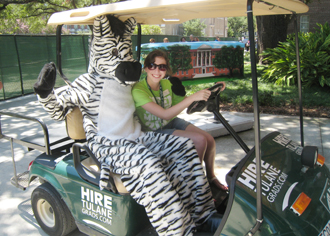 Student Ryan Jones, orientation team leader, wears a zebra costume as Hilary Adams, student director for Welcome Week, drives him around the uptown campus to promote a program for new students called "No Zebras, No Excuses  Being the Change." (Photo by Mariana Zanotti)

The uncommon promotion is part of the guerilla marketing campaign to promote "No Zebras, No Excuses  Being the Change," a program on Thursday (Aug. 27) in McAlister Auditorium at 7 p.m.

It is a mandatory program for all new students that covers issues of stalking, harassment, intimate partner violence, the "rape myth" culture, sexual assault and sexual aggression.

Zebras are known to be bystanders; in the wild, a herd will run from an attacking lion until one is chosen as the prey. Then, the other zebras will return to their normal activities, explains Erica Woodley, assistant dean of students.

"What makes this program different is that it calls upon every member of the university community to ensure that there are 'no zebras,'" she says.

Woodley notes that this program is different from many programs about gender violence and, indeed, different from those that Tulane has held in the past.

"This program is the first of its kind which really focuses on the role of bystander intervention in the case of gender violence and sexual aggression," Woodley says. It is sponsored by the Office of Orientation and Student Transitions and the Office of Violence Prevention and Support Services.

The educational event is facilitated by Steve Thompson, author of No More Fear and a nationally recognized speaker. Woodley added that Thompson also is putting on programs for student athletes and faculty and staff members.

For more information, contact the Office of Orientation and Student Transitions at 504-865-5180 or e-mail Erica Woodley.