As jazz musicians, gospel vocalists and down-home bluegrass string players, members of the Tulane University community will share their talents alongside some of the greatest musical acts in the world during the 2008 New Orleans Jazz and Heritage Festival beginning this weekend (April 25â“27). 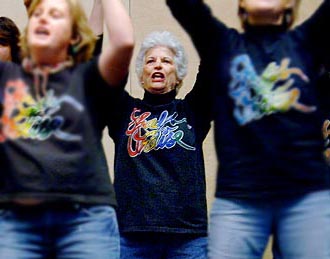 Charlotte Travieso, director of the Office of Alumni Affairs, sings bass and serves as president of the Shades of Praise choir. The nondenominational, multiethnic choir performs during the first weekend of the 2008 New Orleans Jazz and Heritage Festival. (Photo by Paula Burch-Celentano)

Charlotte Travieso, director of the Tulane Office of Alumni Affairs and president of the nondenominational, multiethnic gospel choir Shades of Praise, sings with the choir at the festival on Sunday (April 27), just as she has since 2003.

Travieso says she returned to New Orleans in 2002 after living in Washington, D.C., where she had become accustomed to the diversity of her community.

"I was really worried that I wouldn't find a spiritual and integrated community, but that's what the choir is," she says. "When you put people together to sing and make harmony, it doesn't matter what color they are or religion they believe in."

Another Tulane Jazzfest star is Dr. Russell Van Dyke, a professor of pediatrics and chief of pediatric infectious diseases at the Tulane School of Medicine. Van Dyke makes his ninth appearance at the festival on Friday (April 25) playing banjo with Hazel and the Delta Ramblers, a band that plays a mix of bluegrass and "old-timey" string band music from the 1920s to '40s. 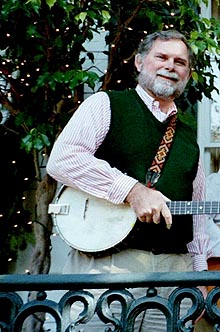 Dr. Russell Van Dyke, a professor of pediatrics at Tulane, plays banjo with Hazel and the Delta Ramblers, a bluegrass band performing during the first Friday of the New Orleans Jazz Festival. (Photo provided by Russell Van Dyke)

"It's a thrill to play for people who enjoy the music so much and are having a great time. It is also fun to expose people to a type of music that they may not be familiar with," says Van Dyke. "Our music is very accessible and makes people dance. The songs have good stories."

Van Dyke believes the festivals held since Hurricane Katrina take on a new meaning in raising the spirits of the city and getting things back to a pre-Katrina state.

"The festival highlights the deep, rich and diverse musical culture of New Orleans, whose survival and continued growth is vital to our future," he says. "This is much of what makes New Orleans so different from other cities."

Paula Burch-Celentano, university photographer in the Tulane Office of Publications, is preparing for her first performance at the Jazz and Heritage Festival. Burch-Celentano sings with the New Orleans Archdiocese Mass Gospel Choir and says she expects her nervousness to fade once the singing starts and the audience becomes involved.

"Once the band cranks up and we start clapping and swaying, I'll be ready," says Celentano. "The words and the music are so intoxicating. It's a real high. You can't help but stand up and groove."

Tulane's uptown campus is also home to the professional performing and presenting jazz institution, the New Orleans Jazz Orchestra. Led by artistic director Irvin Mayfield, the orchestra will make an appearance at the festival on Sunday (May 4).

The 2008 festival features the "largest lineup in its history," according to festival promoters, and includes performances by Stevie Wonder, Sheryl Crow, Keyshia Cole and Billie Joel among others. Festival dates are April 25â“27 and May 1â“4.