Film shoots are bringing some star power to the university, not the least of which is New Orleans' favorite native son, Harry Connick Jr. 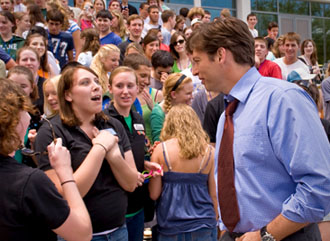 Connick was in town (June 9â“15) and on campus, shooting a Lifetime Network movie, Living Proof. He plays Denny Slamon, a physician and researcher at the University of Californiaâ“Los Angeles Medical Center who developed an experimental and groundbreaking treatment for breast cancer.

Connick admitted this role is close to his heart due to the fact that he lost his mother to ovarian cancer when he was 13.

“This guy is a real hero,” Connick said in an interview between takes. “I've had my personal dealings with cancer so that's always been the thing I've tried to support, any kind of cancer research. So when this opportunity came along, I thought it was great, because they're really going to promote it well and spend a lot of money on it. It's going to raise a lot of money for cancer research.”

“It's a great place to shoot a movie,” said Connick. “It has everything any other city has. The crews are great. The locations are great. I'd shoot every movie here if I could.” 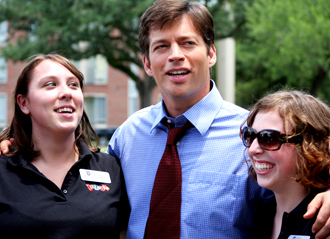 Tulane fans are thrilled to meet musician and actor Harry Connick Jr. on the uptown campus. (Photo by Ryan Rivet)

He said it was no accident that New Orleans was picked to be the filming locale, as opposed to Los Angeles, with Tulane standing in as UCLA.

“They have other cities that they look to before places like L.A. because of the tax breaks, and New Orleans is one of the ones that's pretty aggressive with that stuff,” Connick said. “They were going to shoot it in Toronto and I asked them if I could shoot it down here, and they said yeah. So it worked out well.”

He said being back home makes it seem like he's not working at all.

“It's really cool to be back here,” Connick said. “I just went to Perlis [clothing store] to get my dad a Father's Day present, and there was a lady in there who used to help us when I was 8 years old. I'm not going to get that when I go to Toronto to do a movie. It's a great feeling.”

A vocal proponent of the New Orleans area following Hurricane Katrina, Connick dismissed the idea that people in other parts of the country are growing weary of hearing about the recovery.

“I don't think people get tired of hearing about Katrina because they know there is still so much work to be done,” Connick said. “I go all over the world and that's the first question people ask: 'How do we help?'”

Connick said he knows Tulane students and other students are an important piece of the recovery puzzle in New Orleans.