During the last two days of classes for undergraduates at Tulane (April 28â“29), clusters of theater students received valuable lessons from renowned actress Blythe Danner as she coached them and provided words of wisdom about acting careers. 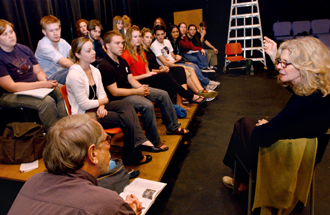 Students probably know Danner first and foremost as star of the hit movie comedies Meet the Parents and Meet the Fockers and as the mother of Oscar-winning actress Gwyneth Paltrow.

She also is a Tony Awardâ“winning star of Broadway and off-Broadway theater, and she's had a long and productive career in films and television.

Danner was married for more than 30 years to the late Bruce Paltrow, a director and producer, who received a bachelor of fine arts from Tulane in 1965. The couple had visited Tulane together in recent years. Danner hopes eventually to establish a visiting artists' series at Tulane in her husband's name.

This week's appearance was Danner's third at the Tulane theater department. She had plans to come to town for the New Orleans Jazz and Heritage Festival and then decided to volunteer to meet with the theater students.

“She called us up, and I said sure,” says Ron Gural, a professor of theater in the Tulane Department of Theatre and Dance. 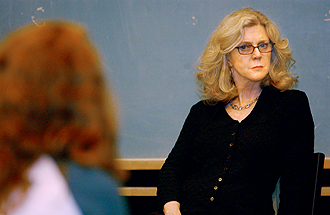 Danner's words of encouragement were “Be brave!” to the group of 20 students who turned out for a lagniappe acting workshop in the lab theater in the Dixon Hall Annex on the last day of classes (April 29).

Danner talked to the students about her career. And then she challenged them to present monologues that they had prepared for the workshop.

Graduating senior Liz McCarthy took the stage with a little coaxing from her peers.

“You have a lovely instrument,” Danner told McCarthy after she presented a speech from Jean-Paul Sartre's No Exit. Danner gave McCarthy notes  theater lingo for verbal feedback  then asked her to perform it again. After the second run-through, Danner gave the aspiring actress more notes.

“I felt encouraged,” McCarthy said later. “Feedback helps me grow and learn what to work on for auditions.”

In response to one student's question, Danner said the most fun she had in a role was playing on stage opposite Kevin Kline in Much Ado About Nothing. She also mentioned the thrill of playing Blanche to Christopher Walken's Stanley in A Streetcar Named Desire.

“I worry about your generation, wanting to go off to L.A. and get right into a TV series, before you've had the time to learn your craft,” Danner said. She urged the students to join a repertory company after graduation, as she did, or pursue graduate school.

Danner described the acting profession as occasionally “gut-wrenching” and “euphoric” and said she has had the “extraordinary experience on a few nights where I left my body.”

Among her accolades, Danner has received an inaugural Katharine Hepburn Medal from Bryn Mawr College's Katharine Houghton Hepburn Center. The award recognizes “women whose lives, work and contributions embody the intelligence, drive and independence” of Hepburn, a four-time Oscar-winning actress.

Danner admitted, “I may not have been so ambitious.” Having a family was important to her, and she took time off from her acting career to spend time with her children. In addition to her career, Danner has been involved in advocacy for the environment, oral cancer and planned parenthood.

Her bottom-line inspiring words for the aspiring thespians: “Becoming a better person makes you a better actor."