Tulane University officials are hailing last week's announcement of a revised plan for a new hospital in downtown New Orleans to serve the needs of the community, including the uninsured, while also enhancing the medical education, research and clinical programs of Tulane and Louisiana State University. Dr. Ben Sachs, senior vice president of Tulane and dean of the School of Medicine, said, "This is a major step forward in the healing of our city." 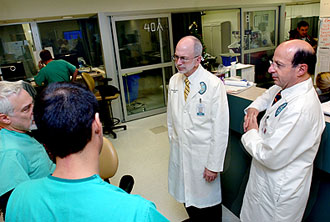 Sachs added, "Tulane supports the building of this state-of-the-art academic medical center, which will be a place to train the next generation of physicians and to provide high-quality care to the medically underserved."

Louisiana Gov. Bobby Jindal's administration on Wednesday (June 18) announced support for a reworked, $1.2 billion plan to build a 424-bed teaching hospital that is designed to provide $2.5 billion in economic stimulus for the Crescent City.

For generations Tulane and LSU medical students were trained at the Medical Center of Louisiana at New Orleans, formerly known as Charity Hospital. Tulane and LSU physicians also staffed the hospital, which was closed after Hurricane Katrina.

Since then, students from both schools have been training at hospitals scattered throughout the greater New Orleans area while the Louisiana Department of Health and Hospitals sought input from Tulane and LSU on how to develop a final strategic plan for a new academic and research medical center.

The new hospital will have 364 acute care beds and 60 beds dedicated to mental care, with built-in capacity for future expansion. The hospital will be state-of-the-art, incorporating the best and most advanced medical technologies, state officials said.

Together with other institutions planned for downtown New Orleans, including a new Veterans Affairs hospital, a cancer center and a bio-innovation center, this new hospital is intended to anchor a biosciences and medical district that will provide world-class medical treatment and an economic boost to the entire greater New Orleans area.

"It is important we create a flagship medical institution that not only meets the needs of our neighbors here in Louisiana but also becomes one of America's best training facilities for tomorrow's science, physicians and allied health professionals," said Alan Levine, secretary of the Louisiana Department of Health and Hospitals.

According to Sachs, another crucial step in improving the healthcare system in New Orleans will be the establishment of neighborhood health centers designed by community members to provide primary health care for the uninsured.

"We hope the focus can now turn to creating a healthcare system that provides high-quality, cost-effective primary care for all the citizens of our region through the development of a network of neighborhood health centers," Sachs said.