The culminating event in James Carville's political science class had two veterans of the 1992 presidential campaign of Bill Clinton  Carville himself and George Stephanopoulos  talking, joking and sometimes sparring about the 2008 election. Stephanopoulos, who now serves as ABC News' chief Washington correspondent, joined Carville's class on Tuesday (April 28), speaking broadly about the role the media played in the recent election and specifically about his role interviewing the candidates and moderating one of the Democratic primary debates. 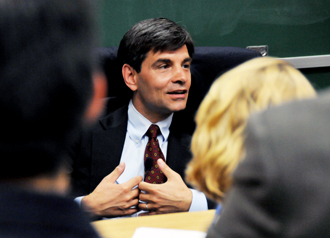 True to form for Carville's class, the current news cycle played a prominent role in the evening's discussion. Stephanopoulos started out by interviewing author and influenza expert John Barry about the swine flu epidemic currently making headlines. The interview, which lasted five minutes, showed the students how an interview unfolds in real time and provided a unique experience for the students, a fact Carville proudly pointed out.

“I don't think anyone else on any other American campus is experiencing anything like this,” Carville said, beaming.

Later, Carville showed video clips of particular interviews Stephanopoulos had conducted, querying him on each one. He began with Stephanopoulos' interview of Iranian president Mahmoud Ahmadinejad, which aired two days earlier.

“It was an interview five years in the making,” said Stephanopoulos, who also is host of ABC's “This Week With George Stephanopoulos.” “Last week I received a very cryptic phone call saying that the window of opportunity [to interview Ahmadinejad] was open.”

Stephanopoulos defended his decision during the Democratic primary debate to ask then-candidate Barack Obama about his relationship with William Ayers, saying he thought it was tough, but fair. He said he understood the impact of the question after the debate ended.

“I got an indication when I walked off stage and Hillary Clinton was really smiling,” Stephanopoulos said. 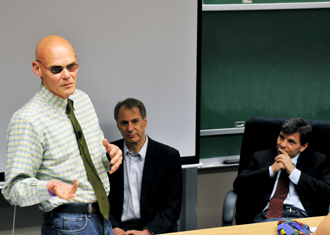 “I don't think anyone else on any other American campus is experiencing anything like this,” James Carville, left, said of George Stephanopoulos' appearance in Carville's classroom. Joining them up front was author John Barry, center.

Carville, a professor of practice in the Tulane political science department, showed the now-famous clip of Obama saying “my Muslim faith” in an interview with Stephanopoulos, who told the class the slip-up was too big to ignore, but he saw it as an honest mistake, and treated it as such.

“I had a decision to make in real time, I couldn't pretend it didn't happen,” Stephanopoulos said. “I didn't think it was fair to treat it as a real admission â¦ but it was never a close call whether to include it or not.”

Stephanopoulos talked about his switch from political insider to journalist, and the difficulties inherent in interviewing someone with whom he had a relationship before the move.

“There's no such thing as pure objectivity,” Stephanopoulos said. “Knowing someone doesn't make it harder to ask the tough questions; sometimes it makes it easier.”

He continued, saying his position in the Clinton administration made a “huge difference” in the way he was perceived by the audience, and whether they thought he could be fair when his show first started.

He admitted that he is at a disadvantage as a journalist because he comes from the other side, where he generally knew everything that was happening and never had to develop investigative tools.

“When I hear a story, I can tell whether it's true or not, but I don't have the ingrained ability to piece that story together.”

Following the lecture, Carville invited the entire class to his house to have dinner with his family and Stephanopoulos.